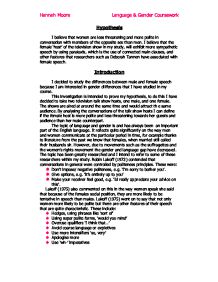 I believe that women are less threatening and more polite in conversation with members of the opposite sex than men. Discuss

I believe that women are less threatening and more polite in conversation with members of the opposite sex than men. I believe that the female ‘host’ of the television show in my study, will exhibit more sympathetic speech by using parataxis, which is the use of connected main clauses, and other features that researchers such as Deborah Tannen have associated with female speech.

I decided to study the differences between male and female speech because I am interested in gender differences that I have studied in my course.

This investigation is intended to prove my hypothesis, to do this I have decided to take two television talk show hosts, one male, and one female. The shows are aired at around the same time and would attract the same audience. By analysing the conversations of the talk show hosts I can define if the female host is more polite and less threatening towards her guests and audience than her male counterpart.

The topic of language and gender is and has always been an important part of the English language. It reflects quite significantly on the way men and women communicate at the particular period in time, for example thanks to literature from the past we know that females, when married still called their husbands sir. However, due to movements such as the suffragettes and the women’s rights movement the gender and language gap have decreased. The topic has been greatly researched and I intend to refer to some of these researchers within my study. Robin Lakoff (1973) contended that conversations in general were controlled by politeness principles. These were:

Don Zimmermann and Candace West also did research around this topic in 1975. Zimmermann and West said that men were more dominant in their conversations, and after studying this; they found that in eleven conversation men interrupted forty six times, and women only twice. This information agrees with that suggested by Lakoff, that women’s approach to conversation is more cooperative than the male competitive approach.

Deborah Tannen has also done extensive research into the language and gender area of the English Language. Tannen has created six contrasts to represent male and female language they are:

In each occurrence the female characteristic is the later, and the male is the first. This would also be the one judged to be the most stereotypically male. Tannen’s division of information from feelings is also known as report talk (male) and rapport talk (female). The differences can be summarised as they are below.

The first line of transcript one starts with one of the feminine traits, however it is made by a man. Kilroy, the male host, apologises for no real reason other than to make the participant in the conversation feel safe in what they are about to discuss. The woman continues this theme of apologising in the second line of her first speech sequence. “And Im very sorry about that”, this also shows another characteristic listed by Lakoff (1975) the intensifier, here it is ‘very’ and precedes the apology connoting that this woman is sympathetic to what the other participant has said. The woman also uses a hedge in her first dialogue another characteristic listed by Lakoff (1975).

Moreover, throughout the woman’s first passage of speech, there are many false starts, this suggests that nerves play a part in what the woman is saying, or that she wants to get the correct information across.

T: but where does the cheating come in?

W: listen it ahs been fine for men to demean women for hundreds of years so we aren’t aloud to say some things?

M: look at your attitudes man!

W2: you basically said //that we look pathetic

M:// I didn’t what I actually said (.) I didn’t say you looked pathetic you said he looked of pathetic