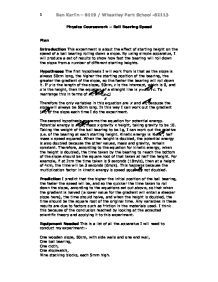 Introduction This experiment is about the effect of starting height on the speed of a ball bearing rolling down a slope.

Introduction This experiment is about the effect of starting height on the speed of a ball bearing rolling down a slope. By using simple apparatus, I will produce a set of results to show how fast the bearing will roll down the slope from a number of different starting heights.

Hypotheses The first hypothesis I will work from is that as the slope is always 50cm long, the higher the starting position of the bearing, the greater the gradient of the slope, so the faster the bearing will roll down it. If y is the length of the slope, 50cm, c is the intercept,which is 0, and x is the height, then the equation of a straight line is y=mx+c. To rearrange this in terms of m, m=(y-c)

Therefore the only variables in this equation are x and m,because the slope will always be 50cm long. In this way I can work out the gradient (m) of the slope each time I do the experiment.

The second hypothesis concerns the equation for potential energy. Potential energy is mgh, mass x gravity x height, taking gravity to be 10. Taking the weight of the ball bearing to be 1g, I can work out the relative p.e. of the bearing at each starting height. Kinetic energy is ½ms2, half mass x speed squared. When the height is doubled, the potential energy is also doubled because the other values, mass and gravity, remain constant.

I can identify a number of trends in my results. When height (and so potential energy) is halved, the time taken is, roughly speaking, squared. This supports the theory put forward in my hypothesis that since k.e. = ½ m/s2, and that if kinetic energy is relative to speed, it is therefore relative to time. This trend can be explained because of the way raising the height increases the potential energy of the ball bearing, thus meaning the speed is increased, and affecting the formula for kinetic energy.

The other trend in my results is also quadratic – when the gradient of the slope doubles, the time squares – this is the direct opposite of the trend relating to the height and the p.e. – a lower value for the gradient, in this case, means a steeper slope and a higher starting position, which means more potential energy and thus more kinetic energy and a faster time.

Having identified these trends, I will now draw a graph. I have decided to graph the time taken by the ball bearing against the relative potential energy it held at the start of the run. I will graph in this way as I feel this is the most relevant data and the easiest to talk about.

I will process my evidence by taking the average times from the three runs. I will do this because I feel that it will be the best way of displaying balanced and reliable results.

Sufficiency of Evidence Given my evidence, it is likely that my conclusion is correct, as there are no results which truly contradict it. However, we have to accept that my results show a limited range of gradients of the slope, and that if the gradient was made much steeper, the times would be out of proportion with the formula, and that if it was made shallower, the ball bearing would not roll at all. Thus, though my evidence is indisputably sufficient to support my conclusion over the range of values for the potential energy of the ball bearing which I tested, the formulas the evidence conforms to is irrelevant to other values, so I cannot know how true my conclusion is in these values.

Further Work There is further, similar work I could do to help continue my investigations into this variable and help ascertain the verity of my prediction and conclusion.

I could use a metal ball, larger than a ball bearing, and a longer, smoothly polished wooden slope which I could quite easily construct myself. I would set up the slope against a meter rule placed vertically, so that I could easily vary and control the starting height. The slope would be longer and the whole experiment enlarged in this simple and practical way so that it would be much easier to time the experiments and eliminate human error to the greatest extent possible.

This further work would help me to answer the original question of how potential energy affects kinetic energy and speed, while increasing the ease of conducting the experiment by making the slope smooth and longer to reduce friction and variation, and to make it easier to take accurate measurements.