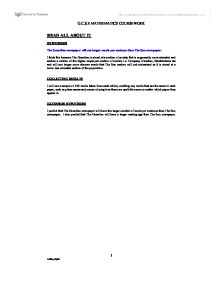 READ ALL ABOUT IT

READ ALL ABOUT IT

The Guardian newspaper will use longer words per sentence than The Sun newspaper.

I will use a sample of 100 words taken from each article, omitting any words that are the same in each paper, such as place names and names of people as these are spelt the same no matter which paper they appear in.

The averages for the number of letters per word in The Guardian Newspaper are:

FORMULA: Add all the numbers together to obtain a total divideby the total frequency of letters.

The Median is themiddle number when the numbers are arranged in order.

The 50th number appears in the frequency table at   4

The mode is the number of letters per word that occurs most often.

A word with 4 letters occurs 23times in the article.

The range is the least number of words subtracted from the greatest amount of letters per word.

Frequency Polygons are marked from the MID POINT

Frequency Polygons are marked from the MID POINT

MEDIAN: ½ up the scale

LOWER QUARTILE: ¼ way up the scale

UPPER QUARTILE: ¾ way up the scale

With in the article I chose to conduct my investigation with in The Guardian and The Sun newspapers the former had the greatest amount of sentences at 25 to the latter of23.  Using this I found that The Guardian had the higher MEAN average of 22.2 words per sentence to The Suns 20.9 words per sentence.  The Sun had a higherRANGEof 43 to The Guardians 30.  This is shown in the diagram labelled

Using the Fog (Frequency of Gobbledegook) Readability Index, I calculated the reading age of the two newspapers I selected.

This shows that there is not much difference in the reading ages of both the papers but this could be because the sentences I chose to compare were mainly in the form of quotes taken from people being interviewed.  Had I chosen a different set of sentences the outcome would have been different.