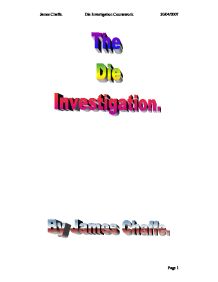 I have decided to draw a tree diagram to see what I am dealing with and then put together in a chart the probability of each person winning on their first, second and third attempts. Then from that see if there are any patterns evolving.

I then noticed some patterns emerging, such as:

If n represents on which attempt they win on I can work out with the nth term that:

I then tested to see if A ∝ (B = C) in a similar pattern between each attempt.

That means that A is always directly proportional to B and C at the same proportion for throughout each attempt.

So using the nth term I can determine that:

From this we now only need to work out attempt 1s probabilities and to simply work out any other different types of scenario just change the denominator so it adds up to one when you add all the players changes together.

From this I can get:

This probability investigation is entirely dependant on what position you go in. If for example C went first, then B second and A third.

As shown from this we can see that in both attempts.

C is three times more likely to win than B.

And B is three times more likely to win than A.

We can work out using my early-described method:

So I can conclude that there is a set way to work out these problems as I have explained. You may also work out what the LCD is for these probability by making the total equal 1.