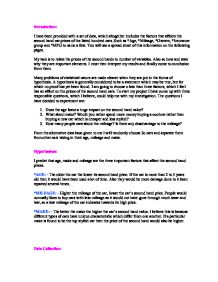 I have been provided with a set of data, which altogether includes the factors that affects the second hand car prices of the listed hundred cars. Such as *Age, *Mileage, *Owners, *Insurance group and *MPG to name a few. You will see a spread sheet of this information on the following pages.

My task is to relate the prices of the second hands to number of variables. Also so how and state why they are important elements. I must then interpret my results and finally come to conclusion from them.

Many problems of statistical nature are made clearer when they are put in the forms of hypothesis. A hypothesis is generally considered to be a statement which may be true, but for which no proof has yet been found. I am going to choose o less than three factors, which I feel has an affect on the prices of the second hand cars. To start my project I have come up with three responsible questions, which I believe, could help me with my investigation. The questions I have decided to experiment are:

From the alternative data base given to me I will randomly choose 3o cars and separate them from other cars taking in their age, mileage and make.

I predict that age, make and mileage are the three important factors that affect the second hand prices.

*AGE: -The older the car the lower its second hand price.

You can compare two sets of ranking using Spearman’s coefficient of rank correlation.

d is the difference between the two rankings of one item of data. n is the number of items of data.

The spearman rank for the data is 0.05, which shows that there is almost no correlation between the age of the car and the second hand price of the car. This seems to contradict my hypothesis. However, I do feel that this is influenced by some of the cars brand new prices.

I have used the cumulative frequency to find upper quartile, median, lower quartile and inter quartile to draw box and whisker diagram.

To get an estimate of the median:

To get an estimate of the lower quartile:

To get an estimate of the upper quartile:

The box plot shows the median, lower quartile, upper quartile and the inter quartile, found out using the cumulative frequency curve for the age of the selected cars.

The median is nearly same as the median gained in the averages calculation. The inter quartile is the same value as the median. The box and whisker diagram also known as the box plot diagram is drawn at the back of the cumulative curve.

The box and whisker diagram has a positive skew. The median is not in the middle of the diagram. It is closer to the lower quartile.

I have found out the percentage depreciation of the car by:

This will help me to clarify the relationship between depreciation of price and age of the car.

Using the percentage depreciation I have calculated the four point moving averages for this data.

The results are followed…

Moving averages are averages worked out for a given number of items of data as you work through the data.

A three- point moving average uses three items of data at a time.

A four- point moving averages uses four items of data and so on.

I have decided to do four point moving averages.

The moving averages show that the results are random. The trend line suggests that it has a negative trend. This shows that there would be a decrease in frequency with an increase in age.

The standard deviation, s, of a set of data is given by the formula:

The higher the standard deviation, the more spread out the data is.  The above formula gives the same results as the other formula but is much easier to work with, especially when the mean is not a whole number.

The other formula is:

I have decided to find out the standard deviation of the age of my 30 cars.

The mean of the age of the second hand cars is 4.6 and the standard deviation is 2.34. This indicates that the age is bigger spread.

I have conducted spearman’s rank to find out whether if there is relationship between the percentage depreciation and the second hand price of the cars.

Like I mentioned in my introduction I do believe that my sample was large enough to represent the population fairly. The price of the car would decrease with increases in mileage and vice versa. The reputed and posh the make of the car more expensive it is. I have proven very clearly that the older the age less the value of its second hand price and lower the mileage higher the second hand car’s value.

If someone else carried out the same way investigation the chance of his or her findings matching my result is about 50 to 60 percent. This is due to the consideration of other factors, such the size of the sample, sampling method, the hypothesis, time provided and etc.

If I were to do the investigation again, the things I would prefer doing differently are:

I would also analyse my results with my sallow students to see whether id there is any match.

I think if someone else were to read my report it would be fairly easier to understand as I have shown all the calculations step by step and given brief description of all. I have repeated my hypothesis again and again and explained my graphs and what they show.