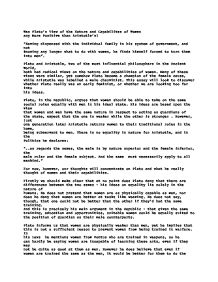 Was Plato&amp;#146;s View of the Nature and Capabilites of Women any More Positive than Aristotle&amp;#146;s?

Was Plato's View of the Nature and Capabilites of Women any More Positive than Aristotle's? "Having dispensed with the individual family in his system of government, and not knowing any longer what to do with women, he finds himself forced to turn them into men". Plato and Aristotle, two of the most influential philosophers in the Ancient World, both had radical views on the nature and capabilities of women. Many of these views were similar, yet somehow Plato became a champion of the female cause, while Aristotle was labelled a male chauvinist. This essay will look to discover whether Plato really was an early feminist, or whether we are looking too far into his ideas. Plato, in the Republic, argues that women should be able to take on the same social roles equally with men in his ideal state. His ideas are based upon the view that women and men have the same nature in respect to acting as guardians of the state, expect that the one is weaker while the other is stronger . However, just one generation later Aristotle returns women to their traditional roles in the home, being subservant to men. There is no equality in nature for Aristotle, and in the Politics he declares: "..as regards the sexes, the male is by nature superior and the female inferior, the male ruler and the female subject. And the same must necessarily apply to all mankind." For now, however, our thoughts will concentrate on Plato and what he really thought of women and their capabilities. ...read more.

Perhaps, therefore, we need to look at his change in opinion of women from the Republic to the Laws. In the Laws Plato returns to the traditional view of women. He states the relative differences - which he had previously made out to be equal - would prevent women being in any way equal to men. He points out, for example, that women have an inferior virtue than men , and that it is necessary for women to listen to different music . Music was inspirational for men, especially in battle, yet it was more apt for women to listen to emotional music because they were emotionally inclined. He also shows how he was aware of the danger of freeing women from their confined, domestic role without giving them an alternative function. He has Socrates give the example of the Spartans to discourage any legislator from: "...letting the female sex indulge in luxury and expense and disorderly ways of life, while supervising the male sex." So why should Plato change his views? Perhaps the most obvious answer here is that the Republic is an ideal situation, predominantly unachievable, whereas the Laws has moved to a conventional and practical situation, one that is recognisable and believable. If this is the case, then perhaps Dickinson was right when he said 'the claim of male superiority should simply be understood as a remnant of masculine prejudice.' This masculine prejudice manifested itself most potently in Plato's pupil Aristotle. ...read more.

opportunities to achieve success in guardianship; yet there are also cases in later works whereby a typical male misogynistic tendency - of the time - creeps in. We cannot blame these comments on carelessness and inconsistency, for they arise out of a deep-rooted belief that women are inferior to men. By seeing this we are not rejecting Plato's views, rather we are recognising his vulnerability to prejudices of his age. His errors cause him to become somewhat less of a feminist, although his considered proposals remain revolutionary for his time. Plato recognised that women had something to offer the state, and although the scenario in the Republic was predominantly unrealistic, the very fact that he considered a new role for women implied he was prepared for change. Aristotle, on the other hand, had a typical view of women. They were little other than incubators and were certainly not capable of doing anything other than household chores. They had to be ruled by men to be kept in line, and it was their nature to be subordinate. Their souls were inextricably linked to their sex, and this in turn made them psychologically deficient. Plato's 'sexless' soul in a sexed body allowed him to persuade that essentially the nature of men and women was the same, as their souls did not in essence differ. In nearly every way Plato's view of women was by far the better of the two. Aristotle's woman was an object, Plato's woman was a human being with a capacity to be educated. She was ahead of her time. ...read more.