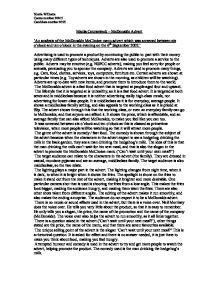 Media Coursework - McDonalds Advert 'An analysis of the McDonalds McChoice menu advert which was screened between six o'clock and ten o'clock in the evening on the 6th September 2002.' Advertising is used to promote a product by convincing the public to part with their money using many different types of techniques. Adverts are also used to promote a service to the public. Adverts may be emotive (e.g. NSPCC adverts), making you feel sorry for people or animals, persuading you to sponsor the company. Adverts are used to promote many things, e.g. Cars, food, clothes, services, toys, computers, furniture etc. Certain adverts are shown at particular times (e.g. Toy adverts are shown in the morning, as children will be watching). Adverts are up to date with new items, and promote them to introduce them to the world. The McDonalds advert is a fast food advert that is targeted at people aged four and upward. The lifestyle that it is targeted at is unhealthy, as it is a fast food advert. ...read more.

The target audience can relate to the characters in the advert (the family). They are dressed in casual, mundane pyjamas and are an average, middleclass family. The target audience is also middleclass, so the two relate. The lighting plays a major part in the advert. The lighting changes from night time, when it is dark, to when it is bright when it shows the fries. The spotlight is shone on the fries to make it stand out from the rest of the advert, making it brighter and more desirable. One particular camera shot that is used is shooting the fries from a low angle. This makes the fries look bigger, making the audience hungry, and making them want the fries. There are also other shots taken from different angles. The editing of the advert makes it run smoothly, and also makes the ending a surprise. The audience do not expect it to be a McDonalds advert. There is no music or sound affects used in the advert, but there is a voice over. ...read more.

The comedy used is the man drinking the hedgehog's milk. There is glamour and s*x appeal in the advert. The fries are made to look glamorous in the spotlight, making them look attractive. Another device used was a famous person doing the voice over. Neil Morrisey does the voice over, making the advert appealing to children as it is 'Bob the Builder's' voice, and appealing to adults as Neil Morrisey is a famous actor and comedian. Deception was used as the audience expects to see a hedgehog drinking the milk, and it turns out to be a man. I think that the advert is successful as it gets straight to the point. The advert is short and tells you all of the necessary information. However, I didn't find the advert amusing, and to me this is attempted humour. I think that the advert will attract a lot of attention, as it highlights the fries, putting them in the spotlight, making them look glamorous and desirable. The advert made me feel hungry and want a McDonalds product. I would buy the promoted products, as they look so yummy! ?? ?? ?? ?? Nicola Williams Centre number 30015 Candidate number 0325 ...read more.