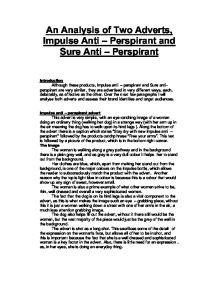 An Analysis of Two Adverts, Impulse Anti - Perspirant and Sure Anti - Perspirant Introduction Although these products, Impulse anti - perspirant and Sure anti-perspirant are very similar, they are advertised in very different ways, each, debatably, as effective as the other. Over the next few paragraphs I will analyse both adverts and assess their brand identities and target audiences. Impulse anti - perspirant advert This advert is very simple, with an eye-catching image of a woman doing an ordinary thing (walking her dog) in a strange way (with her arm up in the air meaning the dog has to walk upon its hind legs). Along the bottom of the advert there is a caption which states "Stay dry with new Impulse anti - perspirant" followed by the products catchphrase "Free your arms". This text is followed by a picture of the product, which is in the bottom right corner. The Image The woman is walking along a grey pathway and in the background there is a plain grey wall, and as grey is a very dull colour it helps her to stand out from the background. Her clothes are blue, which, apart from making her stand out from the background, is one of the major colours on the Impulse bottle, which allows the reader to subconsciously match the product with the advert. Another reason why the top is light blue in colour is because this is a colour that would show up any sign of sweat, however small. ...read more.

The picture of the product is very large and subsequently very eye - catching. This makes the reader visually remember the product, instead of relying on them remembering a fancy advert and being reminded of the product. This image also makes use of the fact that Sure anti - perspirant is in a very large container, with one hundred millilitres more than the average size container. This advert is taken as a close up shot. This allows the reader to see everything on the page, but sacrifices the surrounding detail and the background. However, in this advert, the main focus is on the product alone, so there is little need for large amounts of the background to be seen. The advert could also have been taken as a big close up, but this would have sacrificed all background detail, and would have made the text and image overlap, making the advert look unprofessional and messy. The image of the larger container is set further back than the picture of the smaller container. This is done very precisely and is important to the advert, as the larger container is set back in such a way that all the text and graphics on the two containers line up, meaning that the reader can clearly see the logo and brand name, and they can look at both images at once, instead of flicking between them. The Text There is a very large amount of text in this advert, with both a title and four paragraphs of text. ...read more.

in this group want to be seen as normal they wonder why the women is doing such a strange thing, and stop to look at the advert, which is when they see the Impulse logo. Another feature of the advert that makes it clear that the younger women in the picture, as she is of that age group, trendy, confident and independent, just like many of the women in the group they are appealing to. The font that the product uses on its container also makes this point, it's not a font that is big and bold, it's in a handwritten style, personalising it to the "select" group of people that are "allowed to use it". The Sure adverts target audience is the middle aged business women/older women, who isn't bothered about what brand name her anti - perspirent is, as long as it works. This is why the Sure advert has gone for an advert that tells the reader everything that it does, rather than trying to make the brand look like it is the coolest brand around. This is made clear by the image on the advert as well, it is just an image of the product, so the reader doesn't have to search for a hidden message within the advert, everything is just there. Also, this advert focuses on the fact that the container is one hundred ml larger than a normal container, and as a business women doesn't want to have to go out and buy an anti - perspirant every week, this will appeal to her. ...read more.