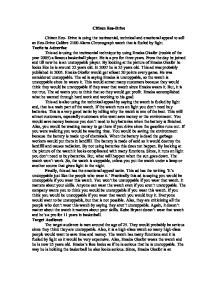 Citizen Eco-Drive Citizen Eco- Drive is using the testimonial, technical and emotional appeal to sell an Eco-Drive Calibre 2100 Alarm Chronograph watch that is fueled by light. Tactic to Advertise This ad is using the testimonial technique by using Emeka Okafor (rookie of the year 2005) a famous basketball player. He is a pro for three years. From the day he joined and till now he is an unstoppable player. By looking at the picture of Emeka Okafor he looks like he is around 22 years old. In 2007 he is 25 years old. This ad was probably published in 2005. Emeka Okafor would get atleast 20 points every game. He was considered unstoppable. The ad is saying Emeka is unstoppable, so the watch is unstoppable since he wears it. This would attract many customers because they would think they would be unstoppable if they wear that watch since Emeka wears it. But, it is not true. The ad wants you to think that so they would get profit. Emeka accomplished what he wanted through hard work and working to his goal. This ad is also using the technical appeal by saying the watch is fueled by light and, that is a main part of the watch. If the watch runs on light you don't need buy batteries. This is a very good tactic by telling why the watch is one of the best. This will attract customers, especially customers who want save money or the environment. You would save money because you don't need to buy batteries when the battery is finished. Also, you would be wasting money to go there if you drive since the gasoline runs out. If you were walking you would be wasting time. You would be saving the environment because the battery is made up of chemicals. When the battery is dead the garbage workers would put them in landfill. ...read more.

They both come from opposite places. Bison are from Northern America so are from a colder climate. Buffalo are from Africa and Asia so they live in warmer climates. So, you can tell the difference by seeing if the mammals live in a cold or warm climate. Also, a buffalo would get affected mentally or physically if it goes in a cold climate. A bison would get affected mentally or physically if it goes to a warm climate. Finally, the ad says that 70% of Canada's wild rice harvest comes from Saskatchewan. Many people would want to read this because the next time they go to Saskatchewan they would remember to buy wild rice since it would be cheaper there. The target audience is people who are omnivores or carnivores that eat buffalo or bison. You might think that you bought bison, but you actually bought buffalo because they look the same. If you hate buffalo and you ate the buffalo thinking it was bison, too bad for you. By reading this ad, you would know the difference between buffalo or bison. So, you can buy bison or buffalo without the need of wasting money. This is why the ad is targeting people who are omnivores or carnivores. Also, the ad is targeting companies who sell only buffalo or only bison. Those companies need to know the difference between buffalo and bison. If a company that only sells bison, accidentally sells buffalo too someone who is allergic to buffalo the company can get sued. The person can get sick or die. If he finds out that he ate buffalo, he can sue the company for selling him buffalo when it is an only bison store. So, the companies must know the differences between buffalo and bison, so they don't get sued. Finally, the target audience is people who want to visit Saskatchewan. On the ad it says that 70% of Canada's wild rice harvest come from Saskatchewan. The rice would be cheaper at Saskatchewan. ...read more.

You would think that is unbelievable and you would tell your friends about it. When you tell your friends about it you are actually advertising for the company because you're telling about the ad. The target audience is ages 16 and up because you have to sign a subscription. Many people would want to sign the subscription and get the free downloads and MP3 but parents don't allow you because you don't know what the subscription is. Also, having the responsibility of taking care of a MP3 is hard. The MP3 is small, so it is easy to loose and easy to break. The people who have the MP3 have to also, be responsible for the subscription. Altogether the target audience is responsible teenagers and adults. Font The word 'free' is the largest word on the page. It stands out because the background is dark blue and light colours stand out on dark. Free is probably the hugest word because you get the MP3 for free. You have to pay nothing. The slogan is the largest writing on the ad because it is telling the best or main part of the ad. On the very bottom there is writing in small. The company doesn't want you to read that because the company wants their full profit. On the bottom the main sentence is 'an active subscription required.' If you don't read that and your subscription is not active, you can't download free tracks. Slogan The slogan is 'peace on earth and a free MP3 player.' This is saying everyone would be happy with a MP3 player. Since, the background has snow I guess the company wants you to give anyone one of their MP3 players as a Christmas gift. Everyone would be happy! This is ad is a product ad because Napster is giving a free MP3 player if you sign a subscription. Also, there is a picture of a MP3 player on the ad. Beside the MP3 there is writing saying how to purchase a MP3 player and free downloads of tracks. ...read more.