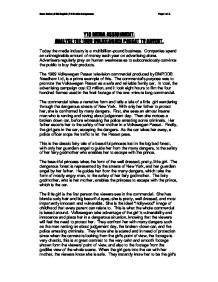 Y10 MEDIA ASSIGNMENT: ANALYSE THE 1989 VOLKSWAGEN PASSAT TV ADVERT. Today the media industry is a multibillion-pound business. Companies spend an unimaginable amount of money each year on advertising alone. Advertisers regularly prey on human weaknesses to subconsciously convince the public to buy their products. The 1989 Volkswagen Passat television commercial produced by BMPDDB Needham Ltd, is a prime example of this. The commercial's purpose was to promote the Volkswagen Passat as a safe and reliable family car. In total, the advertising campaign cost �3 million, and it took eight hours to film the four hundred frames used in the final footage of the one-minute long commercial. The commercial takes a narrative form and tells a tale of a little girl wandering through the dangerous streets of New York. With only her father to protect her, she is confronted by many dangers. First, she sees an almost insane man who is ranting and raving about judgement day. Then she notices a broken down car, before witnessing the police arresting some criminals. Her father escorts her to the safety of her mother in a Volkswagen Passat. ...read more.

The fact that the mother is driving the car and not the father fails to limit the range of potential buyers. Actually, it increases it by indicating that the Passat is not just a man's car. This combined with the little girl comfortably in the back of the car, successfully portrays the Passat as a family car, fulfilling the family car section of the brief. To fulfil the last section of the brief, to portray the Passat as reliable, Volkswagen compare it with the other car that has broken down. The fact that Passat has not broken down suggests that it is reliable. This is reinforced with the slogan at the end, which reads: "If only everything in life was as reliable as a Volkswagen". This statement presumes that everybody knows that a Volkswagen is reliable. Those who don't are forced to conform to everybody else and to "know" that a Volkswagen is reliable. It leaves no place for the viewers to make their minds up, just tells what they know. Volkswagen's self-confessed brilliant reputation is backed up by the police officer, who stops all the traffic just to let the Volkswagen Passat pass. ...read more.

This gives adds style and class to the commercial as well as giving it a vintage effect. It also encourages the viewer to relate it to documentaries, making the commercial seem more truthful. The advert is effective, in that it does promote the Volkswagen Passat as a safe and reliable family car, and I do believe that some families, after watching the advert, went out and purchased a Passat. The media has an incredible amount of control over our lives; they have the power to form peoples' opinions on not just a product, but a whole subject. They have the power to tell us what is cool and what is not, what we should watch, what we should say, and what we should wear. Why would "what we should buy" and "what we should drive" be any different? The 1989 Volkswagen Passat advertising campaign did successfully convinced people that the Passat was a safe and reliable car, and made a marked increase on sales. This proves that the advert was effective, and caused families after watching the advert to go out and purchase a Passat. ?? ?? ?? ?? Dave Burton; GCSE English; Y10 Media Assignment. Page 1 of 3. ...read more.