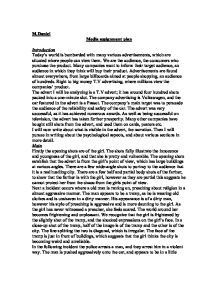 M.Daniel Media assignment plan Introduction Today's world is bombarded with many various advertisements, which are situated where people can view them. We are the audience, the consumers who purchase the product. Many companies want to inform their target audience, an audience in which they think will buy their product. Advertisements are found almost everywhere, from large billboards aimed at people shopping, an audience of hundreds. Right to big money T.V advertising, where millions view the companies' product. The advert I will be analyzing is a T.V advert; it has around four hundred shots packed into a one-minute slot. The company advertising is Volkswagen, and the car featured in the advert is a Passot. The company's main target was to persuade the audience of the reliability and safety of the car. The advert was very successful, as it has achieved numerous awards. As well as being successful on television, the advert has taken further prosperity. Many other companies have bought still shots from the advert, and used them on cards, posters etc. I will now write about what is visible in the advert, the narration. Then I will pursue in writing about the psychological aspects, and about various sections in more detail. Main Firstly the opening shots are of the girl. The shots fully illustrate the innocence and youngness of the girl, and that she is pretty and vulnerable. ...read more.

The car is emitting heavy steam, and the bonnet is open fully. The man looks stressed, and comments "I cannot believe this!" Again the girl appears shocked. The car does in fact relate to the product, so the advertisers juxtapose the contrasting images. Also after this there are some shots of the Passat in action. So the audience don't just think of how bad the city is, there are shots of the girl playing. This reinforces the innocence of the girl, and youth. There is also a aerial picture of the city with the girls face above. This is a device used for the audience to mentally connect the two, and realize what is bad. But just as the audiences believe all is glum, in arrives the Passat to make things better. The image in the wind mirror is that of a beautiful women, smiling warming. The Passat parks, and for the farther guides her into the car. For the first time the child smiles, then there is a aerial shot of the car and city. The car drives on and is unaffected by all the chaos which exists around the car. The Passat has saved the day. The young, innocent child is saved and is no longer suffering. Next a wide aerial pan shot, then the slogan which defines everything seen-"if only everything in life was as reliable as a Volkswagen". ...read more.

This is what the audience would think. This toys with the audience's emotions, as they believe the stereotype to be misconceived. The sounds in the advert play another important part, both diagetic and non-diagetic. However there is little diagetic sounds, such as the tramp preaching. The non-diagetic sounds of the chaos in the city represent the busyness and urgency of the city. The music adds to the atmosphere, and sets the audience thinking. The message from the song relates to the action in the advertisement, and the characters. The music combined with the black and white images are a powerful method moving the audiences emotions. The car ties in with all the features in the advert, as being the symbol of our protection, which is what the audience believes. The association of this persuades the audience to buy the car, which is the aim of Volkswagen. The car itself is shiny and is easily seen. Compared to the other cars seen briefly in the advert, the Passat is far superior. "If only everything in life was as reliable as a Volkswagen." Volkswagen have included this to the advert because it sums up everything viewed in the advert, and relates the product not other things. Personally I believe the advert is very successful. The advertising company have taken a very different approach, much more appealing to the audience's emotions. Rather than the approach taken by different car companies. The advert has ingenious way of combining the product with the message, and the audience associate the car with the message. ...read more.