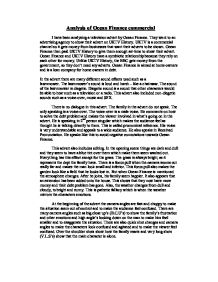 In the opening scene things are dark and dull and they seem to have a blue tint over them which make them seem washed out. Everything has this effect except for the grass. The grass is always bright, as it represents the dept the family have. There is a focus pull when the camera zooms out really far and makes the man look small and inferior. This focus pull also makes the garden look like a field that he looks lost in. But when Ocean Finance is mentioned the atmosphere changes. After he joins, his family seem happier. It also appears that an extension has been added onto the house. This shows that they now have more money and their debt problem has gone. Also, the weather changes from dull and cloudy, to bright and sunny. ...read more.

At the beginning of the advert the characters clothes seem quite dull, ordinary and cheap. But after they joined Ocean Finance, their clothes are bright and ordinary. The characters represent an average, middle class family to make the audience feel that it appeals to them. Ocean Finance mentions that they have been in business for 15 years. This makes them seem reliable and trustworthy. They also mention that they have helped over 200 000 homeowners to make the audience feel as if they know what they are doing. At the bottom of the screen there are tiny facts that don't stay on the screen for very long. The images take up about 99% of the screen so the viewer doesn't notice the hard facts at the bottom. The facts include what percentage an Ocean Finance customer would pay. The phone number and website is big and highlighted so the viewer will notice it. The phone number is also free to make it easier for the viewer to call them. ...read more.