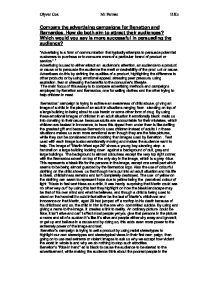 “Advertising is a form of communication that typically attempts to persuade potential customers to purchase or to consume more of a particular brand of product or service.” 1

Advertising is used to either attract an audience’s attention, an audience to a product or cause or to persuade the audience the merit or desirability of the product or cause. Advertisers do this by defining the qualities of a product, highlighting the difference to other products or by using emotional appeal, stressing peer pressure, using aspiration, fear or stressing the benefits to the consumer’s lifestyle.

The main focus of this essay is to compare advertising methods and campaigns employed by Benetton and Bernardos, one for selling clothes and the other trying to help children in need.

Bernardos’ campaign is trying to achieve an awareness of child abuse, giving an image of a child in the place of an adult in situations ranging from standing on top of a large building to being about to use heroin or some other form of drug. By using these emotional images of children in an adult situation it emotionally blackmails us into donating to their cause because adults are accountable for their mistakes, which children are basked in innocence, to have this ripped from under them is like defiling the greatest gift and because Bernardo’s uses children instead of adults in these situations makes us even more emotional even though they are the fake pictures, while they can be considered more shocking than images used by Benetton. Text used with each image is also emotionally moving and makes the audience want to help. The image of “Martin Ward age 29” shows a young boy standing atop a handrail on a large building looking down against a background of dull, grey and large buildings. The background is almost colourless except the very top right corner, with the Bernardos advert on top of the only sky in the image, which is a grey-blue. This represents a bleak life for the persona in the image, except one small part which seems to be being almost guarded by the Bernardos logo. Also the use of colourful clothing on the child shows us that though he is put into an adult situation and his life is bleak, childishness remains and isn’t completely destroyed. The use of yellow on the clothing can seem to represent hope due to yellow being the perceived colour of light. “Made to feel worthless as a child, it was hardly surprising that Martin could see no other way out” by using this text they highlight on how the bleak landscape may be that of his own mind and what he believes, and though a child is being used to stand on the handrail it could infact either be the last of Martin’s childhood and innocence or that Martin, aged 29 had jumped off a rooftop to his death because of his childhood and so, the child in him is the one who committed suicide. By using and giving a name to the image, it creates a link to reality. An ordinary picture could be fake, it isn’t alive and can’t affect most people yet you give that persona in the picture a name and all of a sudden it’s like it’s alive and people either shy away and ignore it, or get up and believe in a cause and by doing so, this adds even more power to the extremely power of the image and text.

Benetton’s campaign is trying to sell a product by using racial stereotypes to highlight our own stereotypes and stereotypical views in their first campaign, then going on to use real extreme or violent images to ask us why we accept how violent the world in whole is and why we do nothing to stop such atrocities.

Benetton’s “Rice in hand” ad is black to cause the audience to be alerted to the advertisement, while making the audience think about the poorest people in the eastern world and how little they have. The open palm can be interpreted as a hand asking for help because of so little they have. The “Rice in hand” ad is focusing on our essential needs, thus the use of a plain background, only an open palm which can symbolize friendship or peace, and the bare essential food we need, cutting out the luxuries that the west can afford. However the white background could also present the idea that white people in history have been seen as a “superior” race and so have encroached on black people’s lands and taken it from them until they are left with their own bare minimums. Both of these make people want to break the stereotype of the hoarding white man and the poor black man.

Where as the “Handcuffs” ad is showing a white man and black man connected at the wrist by hand cuffs, they also appear to be wearing blue prison overalls. The handcuff around the black man’s wrist appears to be tighter because of the veins being more visible but this may be coincidence. This ad draws the audience to think about cultural stereotypes of black males as trouble makers where as white people are seen as average; normal and yet the handcuffs may be seen as a link between races, that we are both on the Earth together yet we are separated, thus the only link is the handcuffs which are forcefully put there. The purpose of this advert is to show the links between the races and how we racially or culturally stereotype each other and though we may not want to be with the other race, we have to. The target audience is everyone who is able to consider these ideas as sooner or later lots of people are subjected to racism, be it causing it or fighting it.

Both these adverts are trying to raise awareness of the way different races come into contact with each other and have racial or cultural stereotypes. Benetton have exploited this to sell their products. They have no intention of giving their profits to starving people in Africa with less than the minimum needed, or to make bridges between white and black communities, instead they use these images to make the potential customer think about the advert and this causes it to become stuck in their head which is known to increase chances of buying the product. The slogan of “United colors by Benetton” also factors into this because it almost tricks the buyer into thinking that their money is going to a good cause.

The images used are from real situations are intended to shock by means of style, layout, central focus or colour. They also raise awareness of issues while selling a product and I believe it is right to use real images of human suffering in this way because it brings the troubles of the world into the fuzzy pink clouds that are our norm and by interrupting that normality people complain, to which you can reply “Then why aren’t you doing anything?” If it takes a clothing company to exploit these images to make people believe in helping and becoming a self-fulfilling prophecy then images of real human suffering should definitely be used.

The general style for the second campaign is much more extreme and violent than the first which originally prayed on stereotypes; the second campaign used shock to instill care into people. “We need to have images that will make people think and discuss. Ad agencies are obsolete, they’re out of touch with the times; they’re far too comfortable. When the client is happy, they stop trying. They don’t want to know what’s going on in the world. They create a false reality and want people to believe in it. We show reality and we’re criticized for it.”2

The second campaigns images forced people to examine their reactions to violent images outside of the TV where they were accepted as normal, and not realized how truly horrific they were until now. The “Death of AIDS Victim” or “La Pietà” ad is extremely moving because the settings, the people in the image are like that of Jesus and yet this is an AIDS victim being compared to the son of God and yet the grief is the same, loved ones and a priest. The image of the wasted corpse, ravaged by disease is enough to burn into someone’s memory without the loved ones crying and it also gives it a sense of reality and despair and it is because of this reality that people block it because they aren’t strong enough to have their safe world penetrated by the reality of the world and it’s violent nature. “Michelangelo’s Pietà during the Renaissance might be fake, Jesus Christ may never have existed. That was real promotion. But we know this death has happened. This is the thing. And the more real the thing is, the less people want to see it.”2

Bernardo’s uses fake images of children in the place of adults in extreme adult situations to make us more emotional and likely to donate to their cause, yet this is seen as acceptable while people should be angry they are effectively being blackmailed emotionally and yet Benetton uses real life images and is criticized.

“Shocking violence in the news is normal, but when you take the same photo out of the news and put a Benetton logo on it, people pause and reflect on their position on the problem. When they can’t come to terms with it, they get mad at us.”2 and yet it is these images that we should be happier about compared to the fakes supplied by Bernardo’s. “It seems that an advertisement which misleads the consumer with deception and lies is considered more correct”2 and this is true with life, because people don’t want reality, they want their perfect worlds where bad things happen to other people far, far away with no consequences on them, yet when the bad things happen to other people far, far away and are brought to them they are outraged. "people don't want news, they want olds"3

“It has always intrigued me how fakes have been accepted and reality is rejected.”2

After analysis, the Bernardo’s campaign seems better equipped to achieve its purpose because it uses image which though still troubling, is deemed less so than that of Benetton’s. Also because it uses fake images instead of real ones, context is added and so people are able to keep their bubbles of saneness that the world’s violence desperately wants to burst.

Although Barnardos seeks to get its audience to give for a good cause, it does it through deceit, lies and emotional blackmail though the end justifies the means and it is seen as acceptable while Benetton’s campaign images gives real life at its core it does so for what is seen as the wrong reasons and so is shunned and criticized.