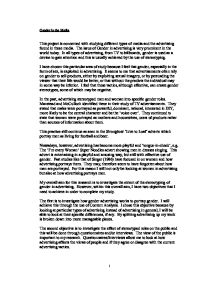 Gender in the Media

Gender in the Media This project is concerned with studying different types of media and the advertising found in these media. The issue of Gender in advertising is very prominent in the world today. In all types of advertising, from TV to billboards, gender is used as a device to gain attention and this is usually achieved by the use of stereotyping. I have chosen this particular area of study because I feel that gender, especially in the form of s*x, is exploited in advertising. It seems to me that advertisements often rely on gender to sell products, either by exploiting s****l imagery, or by persuading the viewer that their life would be better, or that without the predicts the individual may in some way be inferior. I feel that these tactics, although effective, can create gender stereotypes, some of which may be negative. In the past, advertising stereotyped men and woman into specific gender roles. Manstead and McCulloch identified these in their study of TV advertisements. They stated that males were portrayed as powerful, dominant, rational, interested in DIY, more likely to be the central character and be the 'voice over'. They continued to state that women were portrayed as mothers and housewives, users of products rather than sources of information about them. This practice still continue as seen in the Strongbow 'Live to Loaf' adverts which portray men as living for football and beer. Nowadays, however, advertising has become more playful and 'tongue-in-cheek', e.g. The 'I'm every Woman' Super Noodles advert showing men in dresses singing. This advert is entertaining in a playful and amusing way, but still with effective use of gender. Past studies like that of Singer (1986) have focused in on women and how advertising portrays them. They may, therefore seem to have forgotten about how men are portrayed. For this reason I will not only be looking at women in advertising but also at how advertising portrays men. ...read more.

This is used to mirror the way of life in Ibiza as well as to show the product enjoyment. Advert 10, however, show a man leaning against a wall holding the product whilst in a beach resort somewhere (possibly in the Caribbean). The posture of the man shows him to be relaxing and this in turn implies that the product is relaxing. All the character is adverts 5, 9, and 10 are slim and attractive. This is intentional because the public likes to see good-looking people, but this portrayal may be contrary to reality. Advert 7 uses Cat Deeley, a television presenter on MTV to promote a service. The advert uses the phone number for signing up to Sky Digital as Cat Deeley's private phone number. This advert design is based on the fact that Cat is a very desirable woman. Although, those who see the advert know that this number does not get them through to Cat, by phoning the number and connecting to Sky Digital, the public will be able to see Cat Deeley on MTV. The character portrayed in Advert 3 is a middle-aged woman. She is shown as a working woman, independent and not needing the help of men. This portrayal goes against the traditional view that women belong in the home and need men to support them both financially and emotionally. Magazine Advertising The advertising in magazines also uses a number of tactics in using gender to sell products. As with billboards, there are those adverts, which use s*x, those which use imagery of traditional roles and others using role reversal. Adverts 1,2,3,5 and 6 all use s*x to sell the products. Advert 1 shows the most blatant use of s*x I have ever seen. The advert shows a pair of female legs with the text 'Opening in July! Don't miss it!' Readers will instantly take this to mean that the legs will be opening in July, but in reality, the text is referring to the motorcycle shop. ...read more.

An example was given in the Levi adverts. It was argued that the public might see the advert and because of it only buy Levi brand jeans. Question 5. Depending on the person interviewed, the answer to this question was different. Several male interviewees responded that they like the portrayal in the advert. Many answered that the portrayal was degrading or exploiting women. However, others argued that it was not degrading because it was just an advert and people can take it how they wish. Question 6. The response that I wanted to get back from my interviews was that the 'beautiful stick-insect' portrayal could have a negative influence on girls and young women. This response is exactly what I got. Nearly all of the people I interviewed picked up on the possible self-image issues that could be interpreted from this type of portrayal. Conclusion In order to draw a conclusion from my study, I need to refer back to my original aims and objectives. My overall aim was to 'Investigate the extent of the stereotyping of gender in advertising'. Within this aim were two sub-objectives to 'Investigate how gender advertising works to portray gender' and to 'Investigate the effect of stereotyped roles on the public'. Content Analysis The portrayals used in billboard and magazine advertising are very similar. Therefore, a large part of my conclusion will apply to both types of advertising. There will be, however, certain aspects that are unique to the specific type of advert. I will look at these separately. The effectiveness of the use of s*x The use of s*x is one of the most powerful tools in advertising and in media. The use of s*x is apparent everywhere (from newspapers like 'The Sun' to Television) to promote a new product. This use of gender is very effective and because of this, it is hard not to find an advert using s*x to attract attention or influence feelings about the products. ...read more.