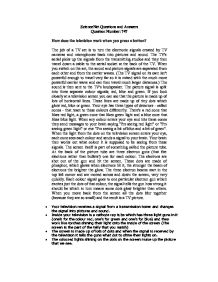 How does the television work when you press a button?

ScienceNet Questions and Answers Question Number: 747 How does the television work when you press a button? The job of a TV set is to turn the electronic signals created by TV cameras and microphones back into pictures and sound. The TV's aerial picks up the signals from the transmitting studios and they then travel down a cable to the aerial socket at the back of the TV. When you switch on the set, the sound and picture signals are separated from each other and from the carrier waves. (The TV signal on its own isn't powerful enough to travel very far so it is mixed with the much more powerful carrier wave and can then travel much larger distances.) ...read more.

When the light from the dots on the television screen enters your eye, each cone sees each colour and sends a signal to your brain. Your brain then works out what colour it is supposed to be seeing from these signals. The screen itself is part of something called the picture tube. At the back of the picture tube are three electron guns (that fire electrons rather than bullets!) one for each colour. The electrons are shot out of the gun and hit the screen. These dots are made of phosphor, which glows when electrons hit it, the stronger the beam of electrons the brighter the glow. The three electron beams start in the top left corner and are moved across and down the screen, very very quickly. ...read more.

and they work like torches shining their light onto the inside of the screen (The screen is the part of the telly that you watch) * The screen is made up of lots of dots and when the signal is received by the television it tells the guns what dot to shine their lights on. * The coloured lights shining on the dots on the screen make up the picture that we see. * Your television screen is coated with a stuff called phosphor that lights up when the light guns shine on it. * The light that shines from the guns isn't coloured - it's the phosphor that's coloured but the different lights make the phosphor colour glow. * The picture on your television screen changes 25 times per second so those guns work really fast changing which dot they're shooting light at. ...read more.