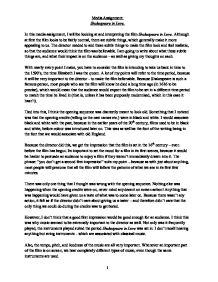 Media Assignment: Shakespeare in Love. In this media assignment, I will be looking at and interpreting the film Shakespeare in Love. Although at first the film looks to be fairly normal, there are subtle things, which generally make it more appealing to us. The director needed to add these subtle things to make the film look and feel realistic, so that the audience would think the film was believable. I am going to write about what these subtle things are, and what their impact is on the audience - as well as giving my thoughts on each. With nearly every point I make, you have to consider the film is intending to take us back in time to the 1590's, the time Elizabeth I was the queen. A lot of my points will refer to the time period, because it will be very important to the director - to make the film believable. Because Shakespeare is such a famous person, most people who see the film will know he died a long time ago (in 1616 to be precise), which would mean that the audience would expect the film to be set in a different time period to match the time he lived in (that is, unless it has been purposely modernised, which in this case it hasn't). Tied into this, I think the opening sequence was discreetly meant to look old. Something that I noticed was that the opening credits (telling us the cast names etc.) were in black and white. I would associate black and white with the past, because in the earlier years of the 20th century, films used to be in black and white, before colour was introduced later on. This was as well as the font of the writing being in the font that we would associate with old England. Because the director did this, we get the impression that the film is set in the 16th century - even before the film has begun. ...read more.

Perhaps the director could have advised the clothing department to rip parts of the commoner's clothes, and then sew them back together with a different coloured thread, that had no contrast at all, to emphasise how poor these people were. Also, the director could have distinguished Shakespeare to be in a particular class. This is because Shakespeare tended to fall in between class structures as far as his clothing was concerned - as his clothes were neither old or worn, denoting a poor person, nor bizarre and extravagant, denoting a rich person. The only thing that impressed me with the clothing was that they usually made the important characters stand out. This was because Shakespeare's clothes (among others) were a different colour to most other people. This was particularly effective in scenes where the mise-en-scene was similar to the main action. For example, in scenes where the mise-en-scene involved dancing, the unimportant dancers tended to wear burgundy and brownish colours, which were similar colours to the background, whereas Shakespeare wore a vibrant green shirt and hat. Although there was barely any change in the style of clothes, Shakespeare always stood out of the crowd. This was an excellent idea. This follows my earlier point in saying that the same classes wore similar clothes, which would potentially have been a big problem. This is because if it wasn't for the colour schemes, then there would have been no way Shakespeare could have stood out by wearing almost identical clothes. We can now see that colours may have had more of an effect than some people may think. This is because not only were the colours important in making important characters stand out, but they also discreetly helped the director make the film a love story... The colours in the background tended to be shades of red. The colour is associated with love and passion - which is probably why it seemed to me as if there was more of the colour red in passionate scenes. ...read more.

I think that this was because he didn't know exactly who he was, and what his purpose in life was. He is trying to figure out in his head who he was, yet he wasn't definite enough to write it down and know he was right. The signatures probably show this as well; because they all seemed to be different, possibly portraying all the different people he was; trying to choose which one he wanted to live as. When he had discovered who he was, he wrote Twelfth night straight away - showing us that his muse (Viola) was essential to the film. To conclude, I will give my overall opinion of the film. I think the film wasn't impeccable, yet it had all the qualities of a good film. It showed us that we don't have to look at physical details to pick every detail up, yet also gives us a variety of ways we can praise the film for its physical appearance. However, I would like to have seen a better link between the Shakespeare/Viola love story, and the Fennyman/Henslowe money problems - to create more conflict. I would also liked to have seen more advanced techniques used - even if it resembled the period the film was set in, the camera angles seemed to get repetitive after a while. For example, fading could have been used when 'flicking' from a scene in the acted play, and the real-life goings on away from the theatre. This would have made the links between them more obvious, and it would also have told us when these links were intended to stop happening. However, the pros by far outweigh the cons. In fact, I was struggling to find many problems that I had with the film at all! The film was a delight to watch - so I would certainly recommend the film for any audience who's the age of 15 and over. 1 ...read more.