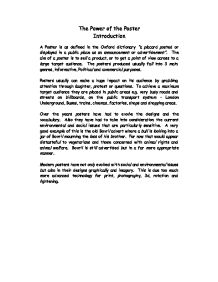 The power of the poster.

The Power of the Poster Introduction A Poster is as defined in the Oxford dictionary "a placard posted or displayed in a public place as an announcement or advertisement". The aim of a poster is to sell a product, or to get a point of view across to a large target audience. The posters produced usually fall into 3 main genres, informative, Political and commercial purposes. Posters usually can make a huge impact on its audience by grabbing attention through laughter, protest or questions. To achieve a maximum target audience they are placed in public areas e.g. very busy roads and streets on billboards, on the public transport system - London Underground, Buses, trains, cinemas, factories, shops and shopping areas. Over the years posters have had to evolve the designs and the vocabulary. Also they have had to take into consideration the current environmental and social issues that are particularly sensitive. A very good example of this is the old Bovril advert where a bull is looking into a jar of Bovril mourning the loss of his brother. For now that would appear distasteful to vegetarians and those concerned with animal rights and animal welfare. Bovril is still advertised but in a far more appropriate manner. Modern posters have not only evolved with social and environmental issues but also in their designs graphically and imagery. This is due too much more advanced technology for print, photography, 3d, rotation and lightening. Fig 1 Fig 2 Poster 1 "Smoking is very Glamorous" This is one of a series of posters produced in USA by the American Cancer Society, which stresses the consequences of smoking. ...read more.

This direct approach of informing the public of AIDS would have made some angry, as it is very threatening. They should have also considered those with AIDS or the people who have had to cope with AIDS in there life and are dealing with it, as those people need hope and positive thinking and I feel that this poster takes all that away. I do feel though that this poster is giving a very straightforward and direct message. AIDS is now close to epidemic levels and why? Possibly because of the public's ignorance or denial that it will not happen to me and the Government is trying to address that with this poster if you have s*x with many partners you could possibly catch AIDS. This poster is not a pleasant one but a death through Aids is far worse. Poster 4 Kissing doesn't kill: Greed and indifference do Fig 5 This poster (fig 5) that I am going to discuss now is a completely different to the previous one in figure 4. Both posters are based on AIDS but this one the recipient is the American Government and the originator the public. This poster was produced by AmFAR, American Foundation for AIDS Research, in USA 1989. The poster is of 3 couples kissing, but the couples are modern couples from a culturally and s******y liberated society. The couples are a coloured man and a white woman; a male ethnic h********l couple; a female h********l couple one of whom is a mixed race lady and the other a coloured woman. ...read more.

I do not feel this is particularly demeaning to women because she is in control. Most modern women these days are far more open s******y and know what they want and Tom Ford is displaying his awareness of this by showing that the s****l equations are changing. I personally do not any particularly strong feeling about it, but I do find it rather amusing of the guts Gucci have to put it out. I also do feel that as a mother I would not like to have to explain that to my child. It is just a little to s****l and very close to something you would find in an adult magazine. We try to protect these sorts of images from our children in magazines and on the television and here is one that can easily be seen by children when stood at a bus stop or out in the car. Conclusion Concluding this assignment I would like to emphasise the importance of the poster and the power it has to pass information on to the public. Whether we like it or not they are a very powerful tool and we do notice them consciously or sub consciously, they have the power to communicate to us and manipulate us. All the posters want to be effective and the originators do this in modern posters by using s*x and nudity and provoke shock, which even without any information on it we know exactly what company it is advertising, a very good company to use as an example is Benneton. The more it is used the more we as a public seem to accept. ...read more.