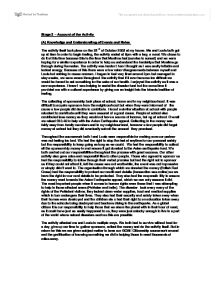 Citizenship - report on my sponsored fast for charity.

Stage 2 - Account of the Activity (A) Knowledge and Understanding of Events and Roles The activity itself took place on the 25th of October 2005 at my house. Me and Louis both got up at 8am in order to begin fasting, the activity ended at 8pm with a large meal. We chose to do it at this time because this is the time that Muslims fast (sunrise to sunset) and we were hoping for a similar experience in order to help us understand the hardships that Muslims go through during Ramadan. The activity was harder than I thought as I was easily irritable and lacked energy. Because of this there were a few minor disagreements between myself and Louis but nothing to cause concern. I began to feel very tired around 3pm but managed to stay awake, we were aware throughout the activity that if it ever became too difficult we would be forced to eat something for the sake of our health. I enjoyed the activity as it was a new experience. I knew I was helping to assist the disaster fund but the same time it provided me with a cultural experience by giving me an insight into the Islamic tradition of fasting. ...read more.

During my activity I collected evidence to prove that I did the activity. I have 4 pieces of evidence. The first is the sponsor form, this accounts for the money collected and shows where it all came from. The second is a photo taken to prove we where there, showing us both together not eating. I also have a signed statement from my mother, backing up our claim that we did not eat from 8am-8pm. She has been able to sign the statement because she witnessed us fasting all day. The final piece of evidence is the email from the British Red Cross to show that the money was donated, verifying the amount, cause and charity. All of these pieces of evidence can be found enclosed. (B) Explanation and Interpretation of Evidence My chosen charity (The British Red Cross) is trying to aid the recovery of parts of Pakistan and India that have been hit by a recent earthquake. Because I am and active citizen of the UK and indeed the world this concerns me and I felt I had to do something to help my fellow human beings. The charity does many types of work, however it mainly concentrates on humanitarian matters, which basically means helping those who have been injured or cannot function properly due to illness. ...read more.

Some people also feel that the government were too slow to mobilise the relief effort, with it being over 24 hours being the relief effort began. Since then the government have appointed Major-General Mohammed Farooq as the head of the Federal Relief Commission to co-ordinate the relief effort of both the Pakistan army and foreign relief organisations. My evidence has helped me in various ways; it's helped me to understand what people were interested in seeing me doing for charity, what people wanted me to donate to and how they wanted me to donate. I have also learned a lot about charity work and what goes on in places thousands of miles away when disaster situations hit. I have included 8 different pieces of evidence which I have analysed in the part of my coursework marked "Evidence". Overall I would say that my Citizenship activity has been hugely successful, I raised over �80 to help the British Red Cross with their relief effort in Asia following the earthquake, enticing 22 different people to sponsor me. I have also learnt a lot during the project about charity work, the British Red Cross, the Asian Earthquake but also about myself. During the activity I learnt a lot about my different strengths and weaknesses and how I react in new situations. I have also enjoyed the whole process from start to finish, finding out bits of interesting new information and enjoying helping others. ...read more.