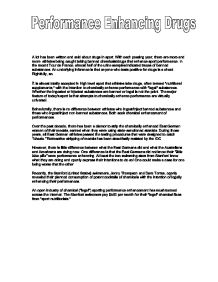 A lot has been written and said about drugs in sport. With each passing year, there are more and more athletes being caught taking banned chemicals/drugs that enhance sport performance. In the recent Tour de France, almost half of the urine samples indicated traces of banned substances. An underlying inference is that anyone who tests positive for drugs is a cheat. Rightfully, so. It is almost totally accepted in high level sport that athletes take drugs, often termed "nutritional supplements," with the intention to chemically enhance performance with "legal" substances. Whether the ingested or injected substances are banned or legal is not the point. The major feature of today's sport is that attempts to chemically enhance performance are virtually universal. Behaviorally, there is no difference between athletes who ingest/inject banned substances and those who ingest/inject non-banned substances. Both seek chemical enhancement of performances. Over the past decade, there has been a clamor to strip the chemically enhanced East German women of their medals, earned when they were using state-sanctioned steroids. ...read more.

This is a process in which users slowly escalate steroid use (increasing the number of drugs used at one time and/or the dose and frequency of one or more steroids) reaching a peak amount at mid-cycle and gradually tapering the dose toward the end of the cycle.5 Extent of Use Results from the 2004 Monitoring the Future Study, which surveys students in eighth, tenth, and twelfth grades, show that 1.9% of eighth graders, 2.4% of tenth graders, and 3.4% of twelfth graders reported using steroids at least once in their lifetimes.6 Percent of Students Reporting Steroid Use, 2004 Student Steroid Use Eighth Grade Tenth Grade Twelfth Grade Past month use 0.5% 0.8% 1.6% Past year use 1.1 1.5 2.5 Lifetime use 1.9 2.4 3.4 Regarding the ease by which one can obtain steroids, 19.7% of eighth graders, 29.6% of tenth graders, and 42.6% of twelfth graders surveyed in 2004 reported that steroids were "fairly easy" or "very easy" to obtain. During 2004 55.7% of twelfth graders surveyed reported that using steroids was a "great risk."7 The Centers for Disease Control and Prevention (CDC) ...read more.

after being smuggled into this country.15 The most common source for obtaining steroids for illegal use is smuggling them into the U.S. from other countries such as Mexico and European countries. These countries do not require a prescription for the purchase of steroids, making it easier to smuggle them.16 In addition to this, steroids are also illegally diverted from U.S. pharmacies or synthesized in clandestine laboratories.17 Legislation Concerns over a growing illicit market and prevalence of abuse combined with the possibility of harmful long-term effects of steroid use led Congress to place anabolic steroids into Schedule III of the Controlled Substances Act (CSA) in 1991.18 It is therefore illegal to possess or sell anabolic steroids without a valid prescription. Some States have also implemented additional fines and penalties for illegal use of anabolic steroids.19 The International Olympic Committee, National Collegiate Athletic Association and many professional sports leagues (including the Major League Baseball, National Basketball Association, National Football League, and National Hockey League), have banned the use of steroids by athletes due to their potentially dangerous side effects and because they give the user an unfair advantage.20 ...read more.