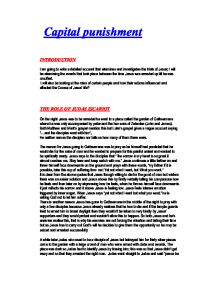 Capital punishment INTRODUCTION I am going to write a detailed account that examines and investigates the trials of Jesus; I will be examining the events that took place between the time Jesus was arrested up till he was crucified. I will also be looking at the roles of certain people and how their actions influenced and affected the Course of Jesus' life? THE ROLE OF JUDAS ISCARIOT On the night Jesus was to be arrested he went to a place called the garden of Gethsemane where he was only accompanied by peter and the two sons of Zebedee (John and James). Both Matthew and Mark's gospel mention this but Luke's gospel gives a vague account saying "... and the disciples went with him", He neither names the disciples nor tells us how many of them there were. The reason for Jesus going to Gethsemane was to pray as he himself had predicted that he would die for the sake of man and he wanted to prepare for this painful ordeal and wanted to be spiritually ready. Jesus says to the disciples that " the sorrow in my heart is so great it almost crushes me. Stay here and keep watch with me." Jesus continues a little farther on and threw himself face downwards on the ground and prays with these words, "my father if it is possible, take this cup of suffering from me! Yet not what I want, but What you want." It is clear from the above quotes that Jesus though willing to die for the good of man but wishes there was an easier solution and Jesus shows this by firstly verbally telling his companions how he feels and then later on by expressing how he feels, when he throws himself face downwards it just reflects his sorrow and it shows Jesus is feeling low. ...read more.

you will see the son of man..." this was a perfectly good reason to put him to death. Blasphemy was a great crime and it would be punished no matter who committed it, the only question being did Jesus really commit blasphemy. Blasphemy is usually defined as a sin against God and religion, e.g. was a modern Christian to speak out against Jesus or say bad things about him then that would be seeing as blasphemy (by Christians). JESUS RESPONSE AND WHY TRIAL WAS ILLEGAL Jesus knew before anyone else that he was going to die, that is why he went to Gethsemane in the dark with only three men that is why he never resisted arrest and admonished his own men for defending him against the enemy and that is why the answers he gave to the questions were incriminating and negative answers. Jesus' answers were ambiguous e.g. "so you say" these type of answers could be taken both to be a yes and a no, he's answers neither confirmed or denied the question he was being asked. Also seeing as the Sanhedrin were against him they were all too willing to interpret the answers to their own benefits. The trial is illegal because he is arrested in the middle of the night, though he visits the temple in the day he isn't arrested then because the public would protest his innocence. The trial too takes place in the middle of the night because yet again was Jesus somehow arrested without his supporters knowing, when they did hear about the trial and went to see it take place they would instantly defend Jesus and expose the trial as a farce. ...read more.

The reasons why people insulted Jesus could've been that they didn't like him or that they felt they had to insult him maybe because the crowd was against him and they didn't want to seem to contradict the crowd by supporting him, also maybe they lost faith in Jesus and thought he was a fake or weak. Here are some of the things they said "you were going to tear down the temple and build it up again in three days! Save yourself if you are God's son! Come on down from the cross! " The teachers of law and the elders mocked him as well ".... Isn't he the king of Israel? If he comes down off the cross now, we will believe in him...! " Even the bandits beside insulted him. One of the bandits said to him "aren't you the messiah? Save yourself and us! " The other robber rebuked him, saying "don't you fear God? You received the same sentence he did. Ours, however, is only right, because we are getting what we deserve for what we did; but he has done no wrong." He then said to Jesus, "remember me, Jesus, when you come as king! " Jesus said to him, "I promise you that today you will be in paradise with me." In Marks Gospel just before Jesus takes his last breath he says "Eloi, Eloi" but in Matthew's gospel he says "Eli, Eli," apart from this minor difference both gospels agree on the rest of Jesus' words which are "lema sabachthani". The English interpretation of both texts is "my God, My god, why did you abandon me? " In Luke's gospel though Jesus says "Father! In your hands I place my spirit! " Jesus dies following these words and the land becomes dark and sad. ...read more.