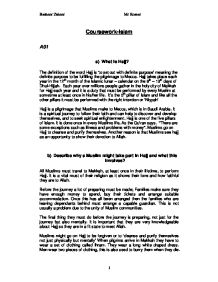 Describe why a Muslim might take part in Hajj and what this involves?

Coursework-Islam A01 a) What is Hajj? The definition of the word Hajj is 'to set out with definite purpose' meaning the definite purpose to be fulfilling the pilgrimage to Mecca. Hajj takes place each year in the 12th month of the Islamic lunar - calendar on the 8th - 13th days of Dhul-Hijjah. Each year over millions people gather in the holy city of Makkah for Hajj each year and it is a duty that must be performed by every Muslim at sometime at least once in his/her life. It's the 5th pillar of Islam and like all the other pillars it must be performed with the right intention or 'Niyyah' Hajj is a pilgrimage that Muslims make to Mecca, which is in Saudi Arabia. It is a spiritual journey to follow their faith and can help to discover and develop themselves, and to seek spiritual enlightenment. Hajj is one of the five pillars of Islam. It is done once in every Muslims life, As the Qu'ran says. "There are some exceptions such as illness and problems with money". Muslims go on Hajj to cleanse and purify themselves. Another reason is that Muslims see hajj as an opportunity to show their devotion to Allah. b) Describe why a Muslim might take part in Hajj and what this involves? All Muslims must travel to Mekkah, at least once in their lifetime, to perform Hajj. It is a vital must of their religion as it shows their love and how faithful they are to Allah. Before the journey a lot of preparing must be made; Families make sure they have enough money to spend, buy their tickets and arrange suitable accommodation. Once this has all been arranged then the families who are leaving dependants behind must arrange a capable guardian. This is not usually a problem due to the unity of Muslim communities. The final thing they must do before the journey is preparing, not just for the journey but also mentally. ...read more.

So they will be reminded that they have to continue to be good in life to be able to enter heaven. Muslims will throw stone the Jamaras because of its relation to a story about Abraham and his temptation by the devil. One day God decided to test Abraham's faith and love towards him. He asked Abraham to sacrifice his only son Ishmael in a dream. When Abraham woke, in extreme distress he told his son Ishmael about the dream. Ishmael told him "O father do what you are commanded to do, and do not worry about me." They followed Islam well so they did not question why God had ordered this; they just accepted that it was his will and must be done. Abraham, Hajar (Abraham's wife and mother of Ishmael) and Ishmael set out for Mina which was the place of sacrifice. On the journey the devil appeared in human form, trying to make Abraham and the others change their minds. They were each tempted once. All three rejected the devil's temptations and picked up stones and drove the devil away. When they reached the place of sacrifice Ishmael asked his father to place him face down so that he could not be stopped when he saw his face. Abraham laid his son on the altar and at the last moment God stopped Abraham and replaced Ishmael with a ram. The rewards for Abraham's obedience were that his first wife gave birth to a son, Isaac. Muslims believe that if they follow God's will that they will prevail and be rewarded in the after life. This also reminds Muslims to make sacrifices for God. A Muslim collecting 49 pebbles and stoning the Jamaras shows that they are eternally fighting evil. They stone the Jamaras seven times with seven pebbles each time over the three days they spend there. Id Ul Adha is when they celebrate and have a great feast is represented when Abraham replaced his son with a ram. ...read more.

The Stand's physical side means you have to stand before God however this would mean nothing on its own as you would need the spiritual side to confess all of your sins and be truly repentant to God and be forgiven. Despite my arguments against the statement, a strong case for it is the simple fact that Hajj is a journey for spirituality; you venture for yourself, or for a loved one who passed away and was not able to make the journey. The Stand may be a very physical ritual and standing before God is the entire point to it, however, the physicality involved would be nothing on its own, as you need the spiritual side to wash away your sins, be truly repentant to God and finally be forgiven. Furthermore, all Muslims have to go to Hajj unless they have unavoidable circumstances; if you are ill then you can pay for someone to go in your place but they have to have made the journey before. Muslims do not have to physically be there but they can in spirit and prayer, this being a very strong argument for the statement, proving the journey to be one within. On the account of all the different reasons above I believe that participating in Hajj is really a journey within. After looking at both sides of the argument I thought that the fact that Hajj is a spiritual journey was more fitting, as it is one of the five pillars of Islam, and its meaning is to set out with a definite purpose; in this case getting closer to God. The pilgrimage to Hajj is a once in a lifetime journey, and equally both the spirituality and physically involved is really important as it reminds you of Allah. Mecca is the holy city of Islam and is home to the Black Stone in the Ka'bah, which is believed to be a meteorite sent by God as a sign to Abraham, who built it into the Ka'bah. The holiness involved in the journey is indescribable. Basheer Zaheer Mr Rosser 1 ...read more.