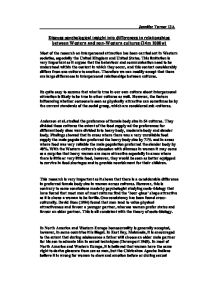 Jennifer Turner 13A Discuss psychological insight into differences in relationships between Western and non-Western cultures (24m 1000w) Most of the research on interpersonal attraction has been carried out in Western societies, especially the United Kingdom and United States. This limitation is very important as it argues that the behaviour and communication need to be understood within the context in which they occur, and this context considerably differs from one culture to another. Therefore we can readily accept that there are large differences in interpersonal relationships between cultures. Its quite easy to assume that what is true in our own culture about interpersonal attraction is likely to be true in other cultures as well. However, the factors influencing whether someone is seen as physically attractive can sometimes be by the current standards of the social group, which are considered sub-cultures. Anderson et al. studied the preference of female body size in 54 cultures. They divided these cultures the extent of the food supply ad the preferences for different body sizes were divided into heavy body, moderate body and slender body. ...read more.

In most of North America and Western Europe, it is believed that women have the same right to derive pleasure from s*x as men, but the Chiricahua Apache Indians believe it is wrong for women to show and emotion before or during s****l activities (Ford and Beach 1951). Men from a village in Mexico try to avoid arousing their wife because they believe a s******y passive wife is more likely to remain faithful (Lewis 1960). There are even major differences in love between cultures. Lee (1973) developed six styles of love; game-playing (Ludus), possessive (Mania), logical (Pragma), altruistic (Agape), companionate or friendship (Storge) and erotic/romantic (Eros). Goodwin (1999) carried out a study to examine whether there are differences between culture groups and different love styles. Conclusions included; Hong Kong Chinese students were found to be more pragmatic (logical) and agapic (altruistic) and less erotic (romantic) than British students. When comparing North American, Russian and Japanese students (Sprecher et al. ...read more.

The most common ground for divorce is infidelity, (Betzig (1996) who studies divorce in 160 countries) however, there is considerable cross-cultural variations in reasons for marital breakdown. Goodwin (1999) found that in china, the divorce rate is very low, less than four percent, and carries shame on both parties and their families. This is a clear example of collectivist values. Simmel (1971) argues that individualism is associated with higher divorce rates as it encourages the individual to constantly seek their ideal partner. In Poland, where divorce rates are very low it is usually women who file for divorce usually due to maltreatment caused by husbands' alcohol abuse. However, in Saudi Arabia, a man does not have to give a reason for divorcing his wife, but the wife can only initiate a divorce if this is specifically stated in the marriage contract as being allowed (Minai 1981). Problems with non-Western results are that they can be inaccurate due to communication difficulties. For example, some exact translations can be impossible and certain emphasises may be missed or misunderstood. ...read more.