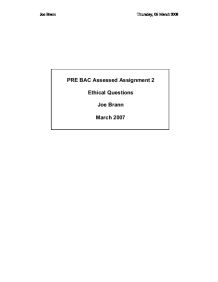 Situation 1: Charity "We shouldn't need events like Comic Relief to make us give to charity." A Christian: Christians believe in following Christ's teaching and actions and since Christ taught and acted upon the giving of charity they would be with the giving of charity. They would think that we shouldn't need these events to raise money but since everyone is not of that mind they would still see it as a good way to raise charitable donations which could be put to Christian purposes. "The Lord has no favourites at the poor man's expense, but listens to his prayer when he is wronged" (Eccus 35:13). A Buddhist: A Buddhist would, I think see events like Comic Relief as a good way to raise money and a good way to gain and distribute good Karma leading to a better life after reincarnation. They would think the nature of the event would not particularly matter if it is for a good cause. Buddhist would believe that we should not need these events as it should be in our nature and part of the path to enlightenment to give to charity. ...read more.

A Buddhist: A Buddhist view on this subject is a bit mixed on this subject but they would overall think of it an unethical for they think that s*x should not be just for pleasure hence one of the 5 precepts I undertake to abstain to the misuse of the senses meaning you should not use an act of reproduction for pure pleasure for it is just a distraction Kant: Kant would be against this subject he says in his 'lecture on ethics' (1770) If a man wishes to satisfy his desire and a woman hers, they stimulate each others desire there inculcations meet, but their object is not human nature but s*x, and each of them dishonours the human nature of the other. Meaning that s*x should again only be for procreation he thought that s*x should be within a set of rules promoting intrinsic worth and dignity not by l**t so it should not be to pleasure each other and if it was out of marriage it was even worse you can see this from 's*x is bad except when it brings out intrinsic worth and dignity' s*x within marriage. ...read more.

country and for that matter to fund the country I think he would believe that if we agreed to go war and if it were in our policy to fund it we should. He, I think would say regardless of our wills and desire we should fully commit to something that we, as a country, have committed to. A Utilitarian: A Utilitarian would very much sympathise with the government for they are stretching the budget to get the best for all or the greatest good for the greatest number they would see what was trying to be done for the country but I think they would partially agree in putting funding more in to the army but would see that there would just have to be cutting elsewhere Me: I think that such controversial subject's of war that have been so argued and debated should be fully funded and backed although that if we were to fund there would be downsides such as cutting elsewhere or higher taxes that would be unbelievably attacked and criticises. And the people in high power could not do this without putting there political positions in serious risk. ?? ?? ?? ?? Joe Brann Thursday, 06 March 2008 ...read more.