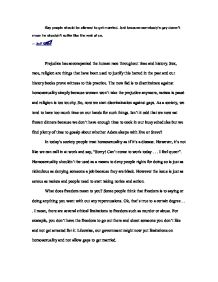 Gay people should be allowed to get married. Just because somebody's gay doesn't mean he shouldn't suffer like the rest of us. -- Jeff Shaw

Gay people should be allowed to get married. Just because somebody's gay doesn't mean he shouldn't suffer like the rest of us. -- Jeff Shaw Prejudice has accompanied the human race throughout time and history. s*x, race, religion are things that have been used to justify this hatred in the past and out history books prove witness to this practice. The new fad is to discriminate against homosexuality simply because women won't take the prejudice anymore, r****m is pass� and religion is too touchy. So, now we start discrimination against gays. As a society, we tend to have too much time on our hands for such things. Isn't it odd that we now eat frozen dinners because we don't have enough time to cook in our busy schedules but we find plenty of time to gossip about whether Adam sleeps with Eve or Steve? In today's society people treat homosexuality as if it's a disease. However, it's not like we can call in at work and say, "Sorry! Can't come to work today . ...read more.

And what about those people who don't believe in religion? What about the atheists? Why would they have to follow through with law when religion doesn't even apply to them? Religion in itself is a funny thing. Isn't it funny how religion I created to bring us all together yet it usually ends up being the sole cause of why we all fall apart. If you think about it, so many wars have been fought over religion- Palestine-Israel, India- Pakistan and the whole situation on Indonesia. I'm not trying to say that Religion is a bad thing, what I mean to say is that religion is overrated and is manipulated to benefit the right wing. In the past, religion has been used to justify the horrible treatment of women and slavery and now its being used to justify the hate against homosexuals. Secondly, it's not like you actually have a choice of being gay or not. One just doesn't wake up on a Sunday morning and say, "Oh! What a wonderful day! I think I will be gay today!" ...read more.

The terms "brother," "sister," and "friend," used to describe the new relationships formed by these ceremonies, are equivalents of the modern-day words "lover" or "partner." Same-s*x unions in Greco-Roman society were considered to be on an almost equal footing with the heterosexual marriages Prohibiting same-s*x marriage deprives gays and lesbians of the fundamental right to marry. It also denies them hundreds of legal, social, economic, and practical benefits that derive from the institution of marriage. .....anecdote.........parallel structure......statistics or expert testimony If this was the same circumstances only on man was black and one was white and the African was turned away it was be r****t. If one was a woman and one was a male it would be sexiest. If one was a gentile and the other a Jew and they were the same in everyway only the gentile was picked it would be Anti-Semantic. The victims in all of these situations would have protection under the law and all could sue for discrimination all but the h********l for he is afforded no legal protection under the law and subject to bigotry. When he is turn away unlike the others he has no legal course of action. ...read more.