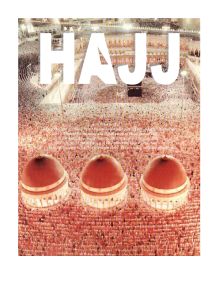 Islam - Hajj Coursework a)i) Hajj is a sacred journey or pilgrimage that every Muslim with the health and money to complete must take part in at least once in their life. Hajj is the fifth of the five pillars of Islam, which shows its importance because the five pillars represent the duties of people of the Islamic faith and is what they base their way of life around. Hajj is a demonstration of solidarity of the Muslim people and an expression of their loyalty and submission to their God. The event of Hajj takes place between the 8th and the 12th day of Dhul Hijjah (the 12th month in the Islamic calendar). This Islamic date cannot be directly converted into a western calendar but the next time Dhul Hijjah comes around will be on December 11th, with the week in which Hajj takes place starting on December 18th 2007. Hajj originates from the original rituals believed to have been undertaken by Muhammad in the early 7th century, although many believe that it can be dated back as far as 2000 BC, the time of Abraham when tens of thousands would join in the Pilgrimage during the week of Hajj, and they would perform a series of rituals each of which with different meanings and purposes. a)ii) Islamic faith is defined by five pillars which guide Muslims in their lives and are the most important things in their faith, therfore the fact that Hajj is one of them highlights it's importants to Muslims. Probabally, the most important thing about Hajj to a Muslim is getting the forgiveness of Allah, this is believed to make the Hajji pure and innocent with all sins erased from their past and a new clean slate to start over with. ...read more.

to get simultaneous access and prevent the jostling and hostilities that went on within the masses of people to get a better position. Money is also an issue for some Muslims who have to travel from all over the world, the Islamic faith being an international religion. Some believers will find it hard to cope with the costs if they are living in poorer countries and may force them to have to cut down on luxuries or even necessities in order to afford the travel there. Another difficulty that Hajjis may face while on Hajj is getting their required access to food and water. It is very hard for the Saudi officials to make sure that everyone taking part in the pilgrimage has a sufficient supply of food and water, considering the huge amounts of people there. Another factor that makes this even more important is the extreme temperatures that the Hajjis face especially on Mount Arafat and on the dessert near Mina where the Muslims must complete the ritual known as 'The Stand' which involves the Muslims standing out in the blistering heat from sunrise to sunset with no time to rest or relax. These could make it hard for Muslims to get hold of the amount of water that their body needs to stay healthy, but, thanks to good organisation of the pilgrimage by the officials, the lack of food and water is rare. The sun can also cause other problems that have the effect of making a Muslim taking part in the Pilgrimage very ill, an example of these conditions are sun burn, swelling and fever, sun stroke, sun exhaustion, weakness and dehydration. ...read more.

Another argument for pilgrimages not being within is the physicals actions that define them, for example with Hajj when they stone the devil, this action of getting rid of all temptations towards sins is not in their head but instead expressed physically in the throwing of the stones. Finally, the very fact that a pilgrmage is the travelling between or to a holy place makes it not a jouney within but instaed a physical passage of elightenment. On the other hand, it could be argued that a pilgrimage is a jouney within. One example that could be used to prove this is the purpose of pilgrimages. One exmaple of this is Muslims go on Hajj in order to get forgivness from their god for their sins, this is not something physical that they are in search of which adds to the evidence that a pilgrmage is a journey within. Also, if the Hajj was not a journey within it would have no affect on them, their life and the way they live, which is the complete opposite of what a pilgrimage is meant to be, therefore making it pointless and unneccisary. Despite the many physical challenges, all of the rituals that take place have their own, inside meaning, for example, wearing the Ihram may appear to be an open expression of faith but it is worn by the Hajjis to be a constant reminder of the 'Day of Death' and the 'Day of Judgment' which helps motivate them to do more good in their life and therefore become closer to Allah. In conclusion I think that a pilgrimage is a journey within because it is a journey in search of nothing that is physical, having said this without the physical challenges the pilgrims would not be able to feel part of the hitorical background of the religion. ...read more.