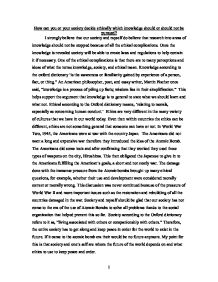 How can you or your society decide ethically which knowledge should or should not be pursued? I strongly believe that our society and myself do believe that research into areas of knowledge should not be stopped because of all the ethical complications. Once the knowledge is revealed society will be able to create laws and regulations to help contain it if necessary. One of the ethical complications is that there are to many perceptions and ideas of what the terms knowledge, society, and ethical mean. Knowledge according to the oxford dictionary 'is the awareness or familiarity gained by experience of a person, fact, or thing." An American philosopher, poet, and essay writer, Martin Fischer once said, "knowledge is a process of piling up facts; wisdom lies in their simplification." This helps support the argument that knowledge is to general to state what we should learn and what not. Ethical according to the Oxford dictionary means, 'relating to morals, especially as concerning human conduct.' Ethics are very different in the many variety of cultures that we have in our world today. Even then within countries the ethics can be different, ethics are not something general that someone can have or not. ...read more.

I believe that universal acceptance will be the most complicated problem of knowledge due to the fact that every human on this world is unique and has his/her's own personal opinion. A personal past example was when I was talking to my cousin's from Switzerland and they believe that learning about the First Native's in Canada is not as important as learning about European history. Personally I believe the same, since I have European background but then my Canadian friends believe that since the Canadians took the land from the Native people they are obliged to teach their future generations all about the First Natives. By saying this I incorporate history education and bias from Europe and Canada but also one can now see that it is very hard to agree universally on an issue because of factors such as bias and patriotism. Patriotic people always want to learn about their country's history first and than learn about others. I believe every country's history is important to learn about but, each to a certain extent. Another problem of knowledge comes with culture and religion. Each culture is unique and different; therefore all countries are different like with the human beings. ...read more.

A key issue still today and still a very sensitive issue is the holocaust that happened 50 years ago. Historians when analyzing this very horrible and sad issue must be very careful when talking about their discoveries in front of the current political environment, otherwise they can get into trouble for creating information and facts. I believe strongly that our society cannot decide ethically which knowledge should be pursued due to the fact of how vast and different everything on this world is. We cannot set certain universal ethical instructions because these instructions will never fit everybody's point of view on this world. Another belief of mine is that morals are relative, and change within societies and time. Therefore, I think that it would be useless to learn some certain ethics that will later change. Ethics when shown poorly and /or wrongly can be very dangerous and hurtful to someone's career. For example, if a person does not have the ethics, whether or not to know if killing someone is wrong, than this will hurt his life and reputation. I believe that certain ethics should be made universal such as, knowing that killing is wrong, and on the other hand that the rest of the ethics are for each individual country's. Word Count: 1399 1 ...read more.