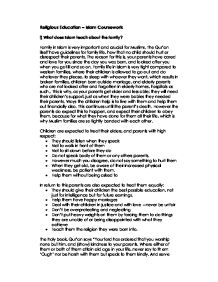 Religious Education - Islam Coursework i) What does Islam teach about the family? Family in Islam is very important and crucial for Muslims. The Qur'an itself have guidelines for family life, how that no child should hurt or disrespect their parents. The reason for this is, your parents have cared and love for you since the day you was born, and looked after you when you got ill and so on. Family life in Islam is very tight compared to western families, where their children is allowed to go out and do whatever they please, to sleep with whoever they want, which results in broken families, children born outside marriage, and elderly parents who are not looked after and forgotten in elderly homes, hospitals as such.. This is why, as your parents get older and less able; they will need their children's support, just as when they were babies they needed their parents. Ways the children help is to live with them and help them out financially also. This continues until the parent's death. ...read more.

Do you agree? Give reasons to support your answer and show you have thought about different points of view. I believe this is partly true. It must be difficult for a young individual to follow Islam in a non-Muslim country, than if they were to be in a Muslim country. They would be hugely influenced by the western culture and by lives of others and may be envious of their way of life. They may begin to think why they are not allowed to do such things, where other people are and start to drift away from the religion, culture and rebel with their parents. Non Muslim peers may pressurize them to do things forbidden in Islam, and the young Muslim individuals may join the activities to not be excluded out of the social group, and be dissociated to because of their religion. However this does not apply to all young Muslims, some may be engaged in Islamic related activities, such as going to a private Muslim school, attending Islamic festivals and having Muslim peers making it easier to follow religion correctly. Or even some young individuals may haven been brought up in such a good and strong way, they do not mind others views and opinions' and follow their religion correctly. ...read more.