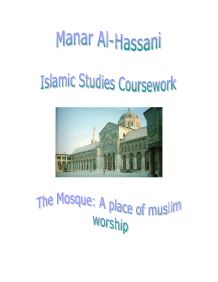 Mosque- a place of worship

is 36m high and is situated over the mosque's interior space. It is an important characteristic of the mosque as it allows air circulation; particularly in a hot country like Syria which is in the Middle East, where Islam was established, and where the climate is very hot. Furthermore, because the dome is built over the main prayer hall it allows the voice of the speaker to amplify. Inside The Grand Umayyad Mosque there are many features of a typical mosque. The most important part of the mosque is the prayer hall; the prayer hall is beautifully decorated with intricate patterns and textual inscriptions which declare religious verses, dates and dedications to various patrons of the mosque. The Mihrab, which is an alcove or niche in the wall in the direction of the qibla, is an indication for Muslims to know where to face when they wish to pray in the mosque. It is also where the Imam stands to lead the prayers and thus is useful to amplify his voice. The mihrab in The Grand Umayyad Mosque is decorated with bands of gold, marble ornamentation and verses from the Holy Qura'an. The mihrab in The Umayyad Mosque The mimbar, a seat with a set of at least three steps, is one of the only pieces of furniture to be seen in the prayer hall of The Grand Umayyad Mosque, and many other mosques. ...read more.

"Do not prevent your women from going to the mosque, even though their houses are better for them" (Hadith - Prophet Muhammad pbuh) However, some Muslims believe that attending and praying in a mosque plays a significant role in a Muslim's life. Offering prayers in congregation was the practice of the Prophet Muhammad (pbuh) and his Sahabah's (companions) as it creates brotherhood and love amongst each other and unites Muslims with one another. The Prophet Muhammed (pbuh) said: "You will not be believers until you have faith and you will not have faith until you love one another". Attending one's local mosque frequently will enable the Muslim community to expand and become a more diverse one; this will also strengthen brotherhood and unity between Muslim brothers and sisters. Furthermore, one will not only have additional rewards for performing prayers in a mosque but will also be rewarded for simply traveling to the mosque. Abu Hurairah reports that the Prophet (SAW) said: "If anyone goes back and forth to the mosque [to attend the prayers], Allah will prepare for him a feast in paradise as often as he goes back and forth." (Related by Ahmad, Al-Bukhari and Muslim) To conclude, Islam does not condemn anyone who fails to visit the mosque, even though it is highly encouraged and rewarded. A person can still be a good Muslim without going to the mosque because one reflects his righteousness in his actions and deeds. ?? ?? ?? ?? 6 ...read more.