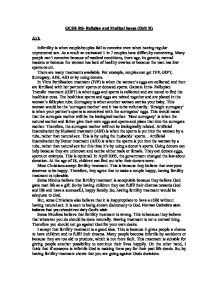 GCSE RS- Religion and Medical issues (Unit H) A) i: Infertility is when couple/couples fail to conceive even when having regular unprotected sex. As a result an estimated 1 in 7 couples have difficulty conceiving. Many people can't conceive because of medical conditions, there age, its genetic, mental reasons or because the woman has lack of healthy ovaries or because the man has low sperm count. There are many treatments available. For example, couples can get IVF, GIFT, Surrogacy, AIH, AID or by using donors. In Vitro Fertilisation treatment (IVF) is when the women's eggs are collected and then are fertilised with her partners' sperm or donated sperm. Gamete Intra- Fallopian Transfer treatment (GIFT) is when eggs and sperm is collected and are tested to find the healthiest ones. The healthiest sperm and eggs are mixed together and are placed in the woman's fallopian tube. Surrogacy is when another woman carries your baby. This woman would be the 'surrogate mother' and it has to be voluntarily. 'Straight surrogacy' is when your partner's sperm is conceived with the surrogates' eggs. ...read more.

Therefore you should not go against God for your own desire. I accept that fertility treatment is a good idea. This is because it gives people a chance to have children and to fulfil their dreams. Many people become infertile by accidents or because they are too old to produce, which is not there fault. This treatment is suitable for giving people another possibility to continue their lives happily. On the other hand, I think that if someone is infertile God is making them pay for their past life deeds. So, by having fertility treatment shows that you are going against Gods decisions. A) ii: Most Hindus believe that by doing transplant surgery you are trying to break Kharma. They also believe in Animsa, which is a belief in non- violence. For that reason, transplant surgery is considered as violence. Some Hindus also believe that whatever God does, there is a purpose to it. Subsequently, if you have a failing organ, it's because God wishes you to pay off your past deeds. Having a transplant surgery would be going against Gods wishes. ...read more.

So, therefore they believe that God will allow this. For example, most Muslims believe that transplant surgery is wrong. This is because they believe that God has given you your body and the organs so to harm that would be harming God which in the Qur'an states to be a sin. (shirk). However, the Shariah Law says that Muslims can donate or exchange blood within the Muslim Community. Most Jews also disagree with transplant surgery. This is because they believe that organs were created by God for individuality. Therefore, touching this would show dishonestly. Jews also believe that blood is sacred and holy, so it should not be exchanged. On the other hand, Jews and Muslims both believe with the sanctity of life and that it should never be miss treated. I think that transplant surgery is right. This is because if someone has an accident caused by another individual and the accident causes an organ to fail, which the only way to continue there life is by having transplant surgery then it should considered as a suitable thing to do. However, if the body rejects the organ it could leave you in a more critical situation than before having the transplant. Hence it could be the wrong thing to do. ...read more.