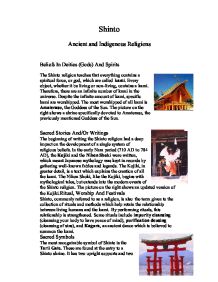 Shinto Ancient and Indigenous Religions Beliefs In Deities (Gods) And Spirits The Shinto religion teaches that everything contains a spiritual force, or god, which are called kami. Every object, whether it be living or non-living, contains a kami. Therefore, there are an infinite number of kami in the universe. Despite the infinite amount of kami, specific kami are worshipped. The most worshipped of all kami is Amaterasu, the Goddess of the Sun. The picture on the right shows a shrine specifically devoted to Amaterasu, the previously mentioned Goddess of the Sun. Sacred Stories And/Or Writings The beginning of writing the Shinto religion had a deep impact on the development of a single system of religious beliefs. ...read more.

Ritual, Worship And Festivals Shinto, commonly referred to as a religion, is also the term given to the collection of rituals and methods which help retain the relationship between living humans and the kami. By performing rituals, this relationship is strengthened. Some rituals include impurity cleansing (cleansing your body to have peace of mind), purification dousing (cleansing of sins), and Kagura, an ancient dance which is believed to summon the kami. Sacred Symbols The most recognizable symbol of Shinto is the Torii Gate. These are found at the entry to a Shinto shrine. It has two upright supports and two crossbars on the top, similar to a soccer goal post, and are frequently painted vermilion red. ...read more.

A shrine and its surrounding area are called jinja. The Itsukushima Shrine is a Shinto shrine on the island of Itsukushima in Hiroshima. The island of Itsukushima has been a sacred place since the origination of the religion. The shrine at high tide seems to be floating on the water, but at low tide, the water level drops and the shrine is available to visit by foot, rather than by boat. Sacred Time The Shinto religion does not follow a specific calendar of events, although sacred time is devoted to the kami in the festivals throughout the year. These festivals are called Matsuri. Some of these festivals include New Years celebrations (Oshogatsu) in January, and the Cherry Blossom Festival (Hanami) in April. Resources Information: http://en.wikipedia.org/wiki/Shinto Photos: http://norman.walsh.name/2003/11/20/images/20031120-030953.jpg http://www.theforeigner-japan.com/archives/200405/images/mainsanc.jpg http://chichustore.jp/pic-labo/limg/kojiki912.jpg http://www.kanko-miyazaki.jp/digilib/picture_b/saito/saito87.jpg http://upload.wikimedia.org/wikipedia/commons/f/fe/Itsukushima_torii_angle.jpg http://upload.wikimedia.org/wikipedia/en/0/0d/Torii_low_tide.jpg ...read more.