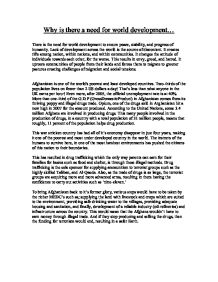 Why is there need for world development

Why is there a need for world development... There is the need for world development to ensure peace, stability, and progress of humanity. Lack of development across the world is the source of discontent. It creates rifts among nation, within nations, and within communities. It changes the attitude of individuals towards each other, for the worse. This results in envy, greed, and hatred. It uproots communities of people from their lands and forces them to migrate to greener pastures creating challenges of migration and social tensions. Afghanistan is one of the world's poorest and least developed countires. Two-thirds of the population lives on fewer than 2 US dollars a day! That's less than what anyone in the UK earns per hour! Even more, after 2005, the official unemployment rate is at 40%. More than one-third of the G.D.P (GrossDomesticProduct) in Afghanistan comes from its thriving poppy and illegal drugs trade. Opium, one of the drugs sold in Arghanistan hit a new high in 2007 for the amount produced. According to the United Nations, some 3.4 million Afghans are involved in producing drugs. This many people involved in the production of drugs, in a country with a total population of 31 million people, means that roughly, 11 percent of the population helps drug production. ...read more.

Until the literacy rate increases, this chain of unfortunate events will continue to plague the future of the poorer countries. A way to increase literacy amongst these damaged countries would be; for charities to make schools for the children, and to attract the children to go to schools, give them an incentive, i.e.; free lunches, this will also lift some of the burden from the parents who now will be required only to make food twice a day (this free lunch service could be provided by the United Nations). The Rwandan Genocide was the systematic murder of the country's Tutsi minority in 1994. This was the bloodiest part of the vicious Rwandan civil war. Over the course of about 100 days, from April 6 to mid-July, at least 800,000 Tutsis were killed during the genocide. Before the genocide of the Tutusi race, the estimated population of this groupp of people was around 4,425,000. After the slaughtering in Rwanda, their total estimated population is only around 2,500,000 in Rwand & Burundi put together! That meant that around 77% of the population was killed off in the span of just 100 days. Today, Rwanda struggles to heal and rebuild. But there are also definite signs of the country showing signs of rapid re-development. ...read more.

In addition, close to 3 billion people did not have access to adequate sanitation facilities! The main reason for poor access to safe water is the inability to finance and to adequately maintain the necessary infrastructure. Overpopulation and scarcity of water resources are contributing factors. The problem has reached such endemic proportions that 2.2 million deaths per annum occur from unsanitary water, ninety percent of these are children under the age of five. There are many charities run in M.E.D.C's that are dedicated to provide safe drinking water, like the very well known charity called Water Aid. It is currently working in 17 countries to help provide safe water, Water Aid is useful in helping the sanitation and hygiene education to some of the world's poorest people. One of the goals set up by the United Nations in the millennium includes environmental sustainability. To ensure peace, prosperity, and progress of the human race, world development is of utmost importance. In our materialistic quest, we in the Western world should not forget the less fortunate, in the developing world. It is only through sustainable development across the world, that there will there be fewer tensions, less inequality, and provision of minimum humane living conditions for one and all. It is thus imperative, that we in the Western world provide necessary support in the form of aid, protection to the weakest and an opportunity to everyone on the planet to live with dignity. ...read more.