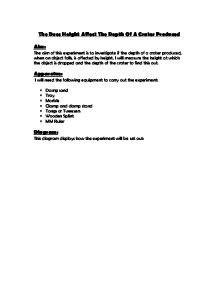 Does Height Affect The Depth Of A Crater Produced

The Does Height Affect The Depth Of A Crater Produced Aim: The aim of this experiment is to investigate if the depth of a crater produced, when an object falls, is affected by height. I will measure the height at which the object is dropped and the depth of the crater to find this out. Apparatus: I will need the following equipment to carry out the experiment: * Damp sand * Tray * Marble * Clamp and clamp stand * Tongs or Tweezers * Wooden Splint * MM Ruler Diagram: This diagram displays how the experiment will be set out: Method: 1) Set up the clamp stand above the tray with damp sand, measure the height you would like to drop the marble from. 2) Carefully clamp the marble in the stand. 3) ...read more.

This shows the marble was travelling at the same speed for the different heights. Evaluation: The method I used was suitable, although I would like to have used something else instead of a clamp stand fro dropping the marble as I found it difficult to make sure I released it correctly. I could use different heights to get a good range of results. I found that measuring accurately was important so there wouldn't be any odd results. I ensured my results would be accurate by measuring, carefully, the height of the clamp stand and level of sand. I didn't change the sand or the marble; the same equipment was used throughout. This investigation could be improved by doing more than one attempt to find a larger range of results. To extend the experiment, you could try it with marbles of different size and shape. I found this experiment quick and easy to complete. Selina Kantepudi ...read more.