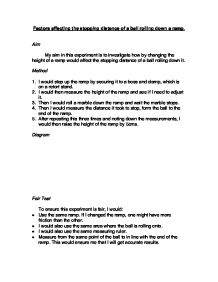 Factors affecting the stopping distance of a ball rolling down a ramp.

Factors affecting the stopping distance of a ball rolling down a ramp.

My aim in this experiment is to investigate how by changing the height of a ramp would affect the stopping distance of a ball rolling down it.

To ensure this experiment is fair, I would:

I will be only investigating the affect of changing the height if the ramp.

I predict that the higher the ramp is, the longer the stopping distance of the ball would be.

From the graph I can see a few anomalous points. This might be because there might have been a bump in the carpet or even a different ball. I would not necessarily say that the last three points of the graph are anomalous because of an error but it is because the ball might have bounced as it rolled down the ramp, as the ramp is higher.

I would have extended the investigation by investigating other factors that would affect the stopping distance of a ball rolling down a ramp such as the angle of the amp, the mass of the ball, surface of the ball and/or the surface it is rolling on to.