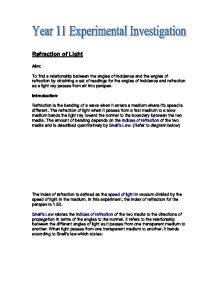 * The protractor, only measuring to an accuracy of 1 degree, which may cause the results to be slightly inaccurate. * Thick refractive light ray which may have cause a difference of almost 3 degrees. * The ray of light passing right through the middle of the perspex. Uncertainty of data and calculations: * Making precise, exact line of the light rays * Parallax error * Estimation of where to draw point Expected and derived relationships or physical values: * The expected result for the relationship between the incident angle and the refracted angle is a constant, 1.50 which is the relative index for the perspex. The derived results are quite accurate, due to the result being obtained and averaged out by comparing the results of three other people. However, the result can be further improved by using a grid that has the protractor printed on it. This would make it easier, to read the angle of both the incident and refracted rays. Conclusion: The investigation of the relationship between the incident angle and the refracted angle was a success. The absolute refractive index of perspex was proven to be 1.50, although there were slight differences in the results. Also, the investigation proved that Snell's law is correct and that when light passes through a medium that is denser, it bends (refraction). Also, the gradient, of any graph plotted for sin i over sin r for particular material, results in a constant, which is its relative index. ...read more.