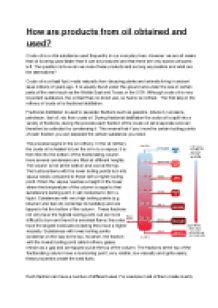 How are products from oil obtained and used?

﻿How are products from oil obtained and used? Crude oil is a vital substance used frequently in our everyday lives. However we are all aware that oil is being used faster than it can be produced and that there are only scarce amounts left. The question is how can we make these products last as long as possible and what are the alternatives? Crude oil is a fossil fuel, made naturally from decaying plants and animals living in ancient seas millions of years ago. It is usually found under the ground and under the sea in certain parts of the world such as the Middle East and Texas, in the USA. Although crude oil is very important substance, the oil itself has no direct use, so has to be refined. The first step in the refinery of crude oil is fractional distillation. Fractional distillation is used to separate fractions such as gasoline, bitumen, kerosene, petroleum, fuel oil, etc from crude oil. During fractional distillation the crude oil is split into a variety of fractions, during the process each fraction of the crude oil will evaporate and can therefore be collected by condensing it. This means that if you know the certain boiling points of each fraction you can separate the certain substance you need. The process begins in the oil refinery. ...read more.

Fossil fuels are also cheap and relatively easy to find. Hence why they?ve been used for long enough that we?re used to depending on them. However there are some major disadvantages of using fossil fuels the first one being pollution. When fossil fuels are burnt many harmful gasses can be produced, for example carbon monoxide. Carbon monoxide comes from incomplete combustion and can be seen in the form of smoke or soot; it can be very dangerous as it reduces the amount of oxygen that the haemoglobin part of the blood can carry around the body, this can eventually lead to death. Fossil fuels also produce carbon dioxide when burnt. Scientists suspect that this is one of the main causes for the greenhouse effects. Sulphur dioxide and nitrogen oxides can also be produces which combine high in the atmosphere and create acid rain. Acid Rain causes the weathering of limestone, encourages aluminium ions, damages trees and more. The mining and extraction of fossil fuels also damages the environment, for example the mining of coal results in the destruction of wide areas of land. Mining this fossil fuel is also difficult and can be incredibly dangerous to the lives of miners. This is not the only disadvantage however; fossil fuels (particularly crude oil) are expected to run out within the next century if the current demand for oil continues. ...read more.

Geothermal power requires no fuel and so the costs are low, however there are not many places where geothermal power stations can be built, and harmful gases and minerals may occasionally come up from below the ground. These can be difficult to control. Hydrogen Hydrogen is often seen as an environmentally friendly alternative to fossil fuels and biofuels. When hydrogen burns, the only product formed is water. Most hydrogen is made by reacting steam with coal or natural gas, which are non-renewable resources. Hydrogen can also be made by passing electricity through water, although, most electricity is generated using coal and other fossil fuels: any pollution from burning these fuels just happens at the power station instead of at the vehicle itself. Another problem with hydrogen is that it is very difficult handle. Hydrogen gas is very flammable can explode it is handled in te wrong way, so therefore It is not as convenient as petrol and diesel. There are Some hydrogen-powered vehicles on the road today, however there are difficulties involved in making and handling hydrogen. In conclusion all energy resources have their advantages and disadvantages. Fossil fuels and nuclear energy have the worst side effects and are non ?renewable so alternatives must be found and used. The change from fossil fuels which have been used for 100?s of years, to something brand new will be difficult, and ?spoil? the scenery but will be a small proce to pay in order for our planet and race to survive. ...read more.

This is a very detailed and comprehensive answer. An attempt has been made to evaluate the alternatives to fossil fuels and the writer has described how fossil fuels are obtained in good detail.

In order to get to 5/5, the writer must use subsections throughout in order to provide a clear structure. Also, a better description of the composition of fossil fuel is needed.