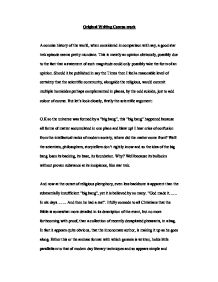 Original Writing Course-work - A concise history of the world, when considered in comparison with say, a good star trek episode seems pretty mundane.

A concise history of the world, when considered in comparison with say, a good star trek episode seems pretty mundane. This is merely an opinion obviously, possibly due to the fact that a statement of such magnitude could only possibly take the form of an opinion. Should it be published in say the Times then I feel a reasonable level of certainty that the scientific community, alongside the religious, would commit multiple homicides perhaps complemented in places, by the odd suicide, just to add colour of course. But let’s look closely, firstly the scientific argument:

O.K so the universe was formed by a “big bang”, this “big bang” happened because all forms of matter accumulated in one place and blew up! I hear cries of confusion from the intellectual ranks of modern society, where did the matter come from? Well the scientists, philosophers, storytellers don’t rightly know and so the idea of the big bang loses its backing, its base, its foundation. Why? Well because its bollocks without proven substance at its incipience, like star trek.

And now at the outset of religious plerophory, even less backbone is apparent than the substantially insufficient “big bang”, yet it is believed by so many. “God made it…… In six days…….

Post Dinosaurs we have an almost transitional period, During this period “Beasts” were the authoritative creatures, descendants of dinosaurs in some cases, however more often than not the first emergence of mammal power figures in the animal kingdom. Again only scientific evidence is available to support this idea. What is religion playing at? They managed to explain the beginning of the earth with a bit of imagination; can they not do the same for this period of history? After all the writers of Star Trek manage to make things up left, or right, of centre, [which they use also].

Continuing along the road of history, we arrive at humanity and the subsequent formation of civilisation. Humans are the only known form of civilised animal, although arguably; slowly destroying your own habitat, and to all intensive purposes committing prolonged extended suicide, is not a common trait to any species, nor can it be considered civilised. Civility, conscience and intellect are qualities. Stored in a feeble one percent difference between humans and apes and what we know about the life beneath the waves is comparable to one hair in a lion’s mane. So to

When studied, all periods of [the most overly applied contradiction in terms ever] modern history, are very interesting. They act like the scientific formula to the chemical reaction we call today. But study takes effort, something not often enjoyed by your average Tom, Dick or Harry. I feel confident that when asked the average man or women on the street, would prefer to watch “The Great Escape”, Or indeed a star trek episode rather than study. This does not bode well for our core subjects opposite the future and I feel obliged to say that I to find Star trek Strangely intriguing at times also. Worried by this as any person of sound mind would be, I considered it for a period of time and came to the conclusion that I enjoyed star trek because of its depth, its detail, its authenticity. Then I realised that this derived from, have you guessed? Its history. Made up though it is [like religion in my opinion] the background of the species and events in Star trek are its attraction.

And so we justify our preliminary statement; A concise History of the world when compared to say a star trek episode seems pretty mundane, but remove the word concise and we have a different set of affairs.