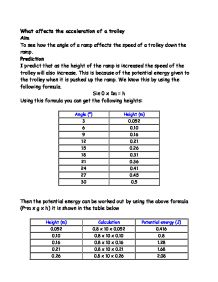 What affects the acceleration of a trolley

What affects the acceleration of a trolley

To see how the angle of a ramp affects the speed of a trolley down the ramp.

I predict that as the height of the ramp is increased the speed of the trolley will also increase. This is because of the potential energy given to the trolley when it is pushed up the ramp. We know this by using the following formula.

Using this formula you can get the following heights:

After the 20° angle we found it was becoming difficult to time the trolley and also to support the ramp. So we decided to change the range from 5°- 45° to a more suitable range of 3° - 30° and also to carry out the experiment 5 times instead of the 3 allowing us to get a better average.

A materials to hold up the ramp e.g. books

Set-up as shown in the diagram

Set the angle of the ramp at 3°

Mark in a start line

Mark 1 meter from the starting line

Start the timer when the trolley passes the start line

Stop the timer when the trolley passes the finish line.

Add 3° to the angle and repeat the experiment

The experiment will be a fair test as there will only be one variable factor: the angle.

I felt that the experiment was done to the best of my ability and went well overall. I did all that I could to ensure that the investigation was fair except for the fact that we used a manual laptop instead of a ticker timer. Although another negative side being that the books that we used to hold up the ramp could have one of two effects. One that they could alter the angle slightly which affects the results. Two it may allow the wood to slip or even tilt to one side which may effect the results too. Using the books and the laptop were both not scientific which meant that the results could be possibly bias. To improve the investigation I would redo the experiment in the same fashion but use the ticker timer and a better material to hold the ramp in place. Although I still feel that my results were accurate enough to draw a firm conclusion as I had repeated the experiment 5 times and found an average which gave the desired result.