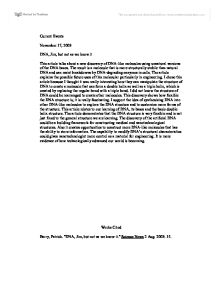 Current Events November 17, 2008 DNA, Jim, but not as we know it This article talks about a new discovery of DNA-like molecules using unnatural versions of the DNA bases. The result is a molecule that is more structurally stabile than natural DNA and can resist breakdowns by DNA-degrading enzymes in cells. The article explains the possible future uses of this molecular particularly in engineering. I chose this article because I thought it was really interesting how they can manipulate the structure of DNA to create a molecule that can form a double helix as well as a triple helix, which is created by replacing the regular bond with a triple bond. I did not know the structure of DNA could be rearranged to create other molecules. This discovery shows how flexible the DNA structure is; it is really fascinating. I support the idea of synthesizing DNA into other DNA-like molecules to explore the DNA structure and to customize more forms of the structure. This article relates to our learning of DNA, its bases and the basic double helix structure. The article demonstrates that the DNA structure is very flexible and is not just fixed to the general structure we are learning. The discovery of the artificial DNA could be a building framework for constructing medical and nanotechnological structures. Also it creates opportunities to construct more DNA-like molecules that has the ability to store information. ...read more.

So two strands can bind to each other if their sequences are complementary. Genes, which contain the recipes for proteins, are made of DNA. When a protein is to be made, the genetic code for that protein is transcribed from the DNA onto a single strand of RNA, called messenger RNA, which carries the recipe to the cell's protein-making machinery. Proteins then perform most functions of a cell, including activating other genes. But scientists are now finding that a lot of DNA is transcribed into RNA without leading to protein production. Rather, the RNA itself appears to be playing a role in determining which genes are active and which proteins are produced. Much attention has focused on micro-RNAs, which are short stretches of RNA, about 20 to 25 letters long. They interfere with messenger RNA, reducing protein production. More than 400 micro-RNAs have been found in the human genome, and a single micro-RNA can regulate the activity of hundreds of genes, said David P. Bartel, a biologist at the Whitehead Institute in Cambridge, Mass., and at the Massachusetts Institute of Technology. As a result, Dr. Bartel said, the activity of more than half the genes in the human genome is affected by micro-RNA. "It's going to be very difficult to find a developmental process or a disease that isn't influenced by micro-RNAs," he said. ...read more.

One shortcoming of RNA interference is that it can only turn genes off. But to treat some diseases, like those in which the body makes too little of a protein, it might be desirable to turn genes on or to increase their activity levels. In one of the latest surprises in this field, scientists have found that RNA can do this too. They have discovered what they call RNA activation, or RNAa. The molecules that perform it are called either small activating RNAs (saRNA) or antigene RNAs (agRNA). "We weren't looking for it," said David Corey, a professor of pharmacology at the University of Texas Southwestern Medical Center in Dallas, who was one of those to discover the phenomenon about two years ago. Scientists in his lab were attempting to silence genes using RNAi directed at the promoters of genes. A promoter is a region of DNA that helps activate a gene. Instead of being silenced, the genes became more active and protein production increased. Dr. Corey said it appeared that the RNA enhanced the activity of proteins that bind to the gene promoters. Whether RNA activation can be used for therapy remains to be seen. It does show, however, that the limits of RNA activity have yet to be understood. There is more to come. November 17, 2008 The Retail DNA Test This article talks about the home DNA test by 23andMe Hamilton, Anita. "The Retail DNA Test." Time. 27 Oct. 2008. 17 Nov. 2008 <http://www.time.com/time/specials/packages/article/0,28804,1852747_1854493,00.html>. ...read more.