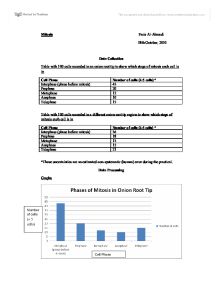 added together. Then, that number divided by 200 (Total root tip cells + total area above root tip cells), and then multiplying everything by 100 to give the specific cell percentage time in mitosis. Cytokinesis: This is when the cell actually splits into its daughter cells. The cell spends 0% (no cells shown to be in cytokinesis) of its time in cytokinesis. The literature value for each phase in an onion cell (in the root tip) states that 90% of the time, the cell is spent in interphase. So 10% of the time, the cell is actually dividing (Mitosis + cytokinesis). The mitosis consists of prophase (5%), metaphase (2%), anaphase (0.5%), and telophase (2%). The left over 1% is the cytokinesis. 3. Describe and compare the structure of a late prophase chromosome with an anaphase chromosome. Late Prophase Chromosome Anaphase Chromosome Diagram Diagram Description A late prophase chromosome consists of two identical sister chromatids. These chromatids are connected together by a centromere, which can be located anywhere in-between the chromosome. Description An anaphase chromosome is a single chromatid, which is then called a chromosome. The chromatid has no centromere, since it does not have another chromatid to connect to. ...read more.

It could also mean that the root tip regions was not a good choice for showing cytokinesis, but rather the process (mitosis) leading up to it. A third possibility could have been counting more cells, however, it is a small probability that a cytokinesis cell is recorded, because it is hard to distinguish between an interphase cell or a newly formed daughter cell from cytokinesis. Cytokinesis is just the final split, and to record that is difficult. Improving the investigation: Firstly, it is important to reduce the error made by the person recording the cells. It is essential to put more care into recording, and to count with more care and accuracy, rather than speeding the experiment. This can already contribute to much more accurate results. Another improvement would be to repeat the experiment two or three times, which would increase the precision of the experiment. If the experiment is repeated three times, an average of the three set of results could be taken, making the results more precise. Increasing the number of cells to record would also be helpful to improving the investigation, because that would leave to more accurate results. If a sample of 400 cells was recorded, then the uncertainty of �5 cells would be less effective. Reducing the uncertainty always causes results to be more accurate. ...read more.