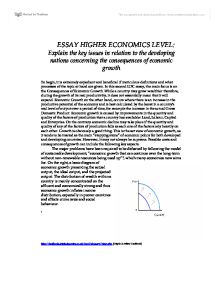 ESSAY HIGHER ECONOMICS LEVEL: Explain the key issues in relation to the developing nations concerning the consequences of economic growth To begin, it is extremely expedient and beneficial if meticulous definitions and what processes of the topic at hand are given. In this second LDC essay, the main focus is on the Consequences of Economic Growth. While a country may grow wealthier therefore, during the growth of its real productivity, it does not essentially mean that it will expand. Economic Growth on the other hand, occurs where there is an increase in the productive potential of the economy and is best calculated by the boost in a country's real level of output over a period of time, for example the increase in the actual Gross Domestic Product. Economic growth is caused by improvements in the quantity and quality of the factors of production that a country has available: Land, Labour, Capital and Enterprise. On the contrary economic decline may take place if the quantity and quality of any of the factors of production falls as each one of the factors rely heavily on each other. ...read more.

LDC's must focus on goals such as extending property rights and force private conglomerates to pay more to the problems they cause, such as pollution of environment. Or another example could be subsidising non-polluting methods of production, and award permits to pollute to a certain extent before buying another tradable permit. However for every problem, there is always a solution within the problem. Perhaps a few suggestions for economic developing countries to follow in achieving their goals of avoiding any negative consequences in their rapid pace of economic growth. To achieve goals like the ones addressed above, solutions can be involving local communities in their own development to propagate efficient economic growth. So externalities need to be taken into account when considering economic growth but, for many developing countries, "there will be a significant opportunity cost if they try to grow while minimising externalities, because this requires investment and perhaps reform, both of these being expensive." 2 1 http://textbooks.triplealearning.co.uk/mod/glossary/view.php (Triple A online Textbook) 2 "http://www.economist.com/world/la/displayStory.cfm?story_id=2193852." (The Economist, Inequality in South America, January 8th 2006) INCOME DISTRIBUTION: As economies grow and develop income distribution is likely to amplify. ...read more.

There is no qualm that people want to enjoy a better standard of living. In addition, Economic growth is the very aspect that enables us to enjoy a comfortable standard of living. Despite the fact that one must keep in mind the favourable consequences of economic growth such as: employment, opportunities for investment and the heights of new significant political and communal dimensions. Economic Growth however, brings about negative consequences such as: inequality of income, negative externalities, such as acidic rain, loss of non-renewable resources, loss of land and lifestyle changes. Many developing nations have a propensity to lack the dominant political outline to control the negative economic externalities, believing that dominating these; will limit the rate of economic growth. Sustainability has become the new format for economists, in regard to developing nations, however the problem lies on the fact of the blindness of economical affluent nations, who tend to ignore the concept of the LDC's, that more is better. 1 http://textbooks.triplealearning.co.uk/file.php/75/mod5_notes/page_22.htm 1 Jackline Wahba, "Keeping up with the Joneses", 22(1), September 2004 (Economic Review) 2 "http://www.economist.com/world/la/displayStory.cfm?story_id=2193852." (The Economist, November 3rd 2006) 3"http://search.ft.com/ftArticle?queryText=Consequences+of+Growth&y=12&aje=true&x=11&id=070302000822 ( Financial Times Report - Romania, "Rapid Growth puts Strain on Stability, March 2nd 2007) 4"http://search.ft.com/ftArticle?queryText=Consequences+of+Growth&y=12&aje=true&x=11&id=070302000822 ( Financial Times Report - Romania, "Rapid Growth puts Strain on Stability, March 2nd 2007) ?? ?? ?? ?? ...read more.