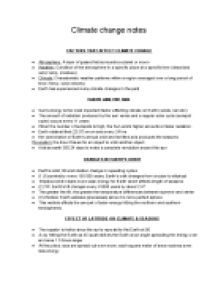 ï»¿Climate change notes FACTORS THAT AFFECT CLIMATE CHANGE 1. Atmosphere: A layer of gases that surrounds a planet or moon 2. Weather: Condition of the atmosphere in a specific place at a specific time (describes wind, temp, moisture) 3. Climate: Characteristic weather patterns within a region averaged over a long period of time (Temp, wind velocity) 4. Earth has experienced many climate changes in the past EARTH AND THE SUN 1. Sun’s energy is the most important factor affecting climate on Earth (winds, rain etc) 2. The amount of radiation produced by the sun varies and a regular solar cycle (sunspot cycle) occurs every 11 years 3. When the number of sunspots is high, the Sun emits higher amounts of solar radiation. 4. Earth rotates tilted (23.5º) ...read more.

The equator is hotter since the sun?s rays strike the Earth at 90 2. A ray hitting the Earth as 45 south strikes the Earth at an angle spreading the energy over and area 1.5 times larger 3. At the poles, rays are spread out even more; each square meter of area receives even less energy HOW ATMOSPHERE AFFECTS CLIMATE 1. Atmosphere is made of N2, O2 and H2O; absorbs energy from Sun and traps energy from Earth?s surface 2. Greenhouse Effect: Warming caused when the atmosphere absorbs thermal energy radiated by the Sun and Earth WINDS DISPERSE ENERGY IN ATMOSPHERE 1. Wind: The movement of air from an area of high to low pressure as a result of uneven heating 2. Transfers thermal energy around the world from warm to cooler areas; affects ocean currents and precipitation patterns WINDS MOVE OCEAN CURRENTS 1. ...read more.

Ocean temperatures change very slowly 5. Earth?s Albedo: the fraction of light that is reflected by the surface of Earth back into space 6. Snow and ice reflect solar radiation (because of their color) 7. The ocean reflects 7% of solar energy; fresh snow can reflect up to 90% - these differences affect average global temperature HOW MOVING CONTINENTS AFFECT CLIMATE 1. Tectonic Plate: Piece of the Earth?s shell that moves around on flowing underlying rock 2. Earth has 12 major plates; changing distribution of land and water affects air patterns, water circulation and transfer of thermal energy 3. Volcanic eruptions spew particles in the air which reflect solar radiation and have a cooling effect HOW HUMAN ACTIVITY AFFECTS CLIMATE 1. Anthropogenic: Relating to or resulting from the influence of humans 2. Human technologies affect the atmosphere; burning coal, oil and natural gas 3. Since the industrial revolution in the 1700?s, the amount of greenhouse gases released into the atmosphere has increased ...read more.