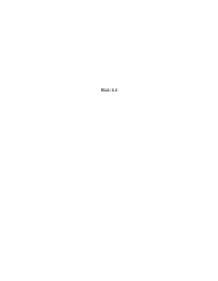 ﻿Block: 2-4 ________________ Part A: Introduction Many areas of the world today suffer from drought, whether it is due to the area?s natural and geographical location or other factors such as global warming and climate change. Drought, according to the Merriam-Webster dictionary, is defined as: a period of dryness especially when prolonged; specifically, one the cause the extensive damage to crops or prevents their successful growth.1 The part of the definition that?s most important is the prolonged and dryness. Droughts by nature are just periods of dryness, therefore the duration of it will have significant impact on the damage it can cause to the affected area, influencing the ecosystem, people, and even its economy. The most common type of drought that occurs are either short, intense droughts that last a few months, or longer, less intense droughts that can last several years or decades. Droughts can be cause by a variety of factors. One factor is the location of the area. Some regions naturally suffer from drought due to the flow of global atmospheric circulation. High pressure areas, such as the sub-tropic high pressure belt at around 20o North and South Latitudes to 30o North and South Latitudes, respectively, allow warm, dry air to descend and create conditions that are common for desert. ...read more.

Environmental Effects: Drought makes the soil extremely vulnerable to erosion. For example, after all of the water in the soil has been evaporated, the vegetation begins to die and the topsoil is exposed. Whenever there is a wind storm, or even just moderately windy days, the topsoil is stripped off. This further hinders the growth of vegetation and allows the rest of the soil to be vulnerable to different kinds of erosion. It estimated that gully erosion deposits the most soil into rivers, at 4.4 t/ha/yr14. When Australia becomes flooded due to extreme amounts of water, the once fertile soil is carried away by the water, where <5% of the soil will contribute to aggradation. In addition to soil erosion, drought also affects the ecosystems that are found in Australia. Animals are forced to congregate around waterholes, which creates interspecific conflicts and competition. Furthermore, plants wither and die due to the lack of water, which reduces food for animals and also increases the threat of forest fires. Forest fires are a prevalent hazard in Australia; in 2013 forest fires have burnt through 131,000 hectares of forest and farmland15. Political Effects: In 1921 the Australian government denies reports that Australia is drought-prone16; however these reports seem all too true. ...read more.

Part F?Conclusion: Drought in Australia has been a serious problem both in the past and the present. This is due to a vast part of Australia being mostly composed of arid or semi-arid land, and its location being directly situated on the subtropical high-pressure belt at around 30oS. Australia is a rather developed and wealthy country so it fares much better than most other LEDCs that also suffer from drought, such as those found in Africa. Drought is however, a rather serious natural disaster so repercussions of it can still be seen and are serious in Australia. Like other countries suffering from drought, Australia?s plant life has been damaged and with it agriculture production has declined. There has also been damage done to the people?s faith in the government over poor ways of dealing with the situation. However, now that Australia is near the end of a long drought and there are better responses to the situation at hand, such as improved management of water via upgrading the piping system, it seems to be able to recover from the disaster. With new ways of dealing with drought such as educating the public and farmers about it and aid from other countries, it is unlikely that Australia in the future will be impaired by droughts as heavily as before. Footnotes?Part B: 1. http://www.bom.gov.au/climate/glossary/drought.shtml 2. http://www.newscientist.com/article/dn21765-australias-decadelong-drought-ends.html 3.http://www.brisbanetimes.com.au/environment/weather/its-official-australia-no-longer-in-drought-20120427-1xpsp.html Footnotes?Part E: 4. http://www.daff.gov.au/agriculture-food/drought/drought-program-reform 5. http://thinkcarbon.wordpress.com/2009/06/22/drought-in-australia-%E2%80%93-the-lessons-we-can-learn-for-tackling-climate-change/ 6. ibid 7. ibid 8. ...read more.