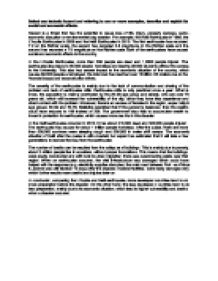 Select one tectonic hazard and referring to one or more examples

Earthquake drills is only practiced once a year. What is more, the population is mainly dominated by the 20-29 age group and elderly, who are over 70 years old, which will increase the vulnerability of the city, since they have less experience and direct contact with the problem. Moreover, there is an excess of females in the region, especially in age groups 30-39 and 70-79. Statistics predicted that if the gender is balanced, then the deaths could have reduced to 169 instead of 308. The government also fails to accumulate wealth to invest in protection for earthquake, which causes more deaths in this disaster. ...read more.

This means that the buildings were poorly constructed and with rural to urban migration, there was overcrowding exists over that region. When an earthquake occurred, the vital infrastructure was damaged which could have helped with the response (e.g. electricity supplies disrupted, the main road between Port-au-Prince & Jacmel was still blocked 10 days after the disaster, medical facilities were badly damaged etc), which further results more deaths and injuries later on. In conclusion, comparing the L'Aquila and Haiti earthquake, more developed countries tend to do more preparation before the disaster. On the other hand, the less developed countries tend to do less preparation, mainly due to its economic situation, which lead to higher vulnerability and deaths when a disaster occurred. ...read more.