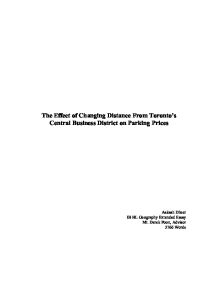 The Effect of Changing Distance From Toronto's Central Business District on Parking Prices.

The Effect of Changing Distance From Toronto's Central Business District on Parking Prices Aakash Dheer IB HL Geography Extended Essay Mr. Derek Poon, Advisor 3766 Words Introduction Toronto, Ontario, Canada is one of the most culturally diverse metropolises in the world, with a population of over 4 million people, and a downtown area wielding much of Canada's financial, political, and educational power (United Nations). With many attractive factors, such as business and employment opportunities, entertainment and shopping districts, and the availability of transportation in such a small area, downtown Toronto is quickly becoming very densely populated, with a population of 670,000 people in an area of under 100 square kilometers (Statistics Canada). This population density of over 7000 people per square kilometer will in turn affect demand for housing, services, and parking (Statistics Canada). A fundamental concept of economics is that as demand for a good or service increases, the price of the good or service will increase as well (Parkin). Therefore, in an area with more people living in it, the demand for parking will be higher than a less densely populated area. As a result, the most densely populated area of the city will be the most expensive. In Toronto, this location is the downtown Central Business District (CBD) area, meaning the highest prices for parking will be located inside of the CBD (Wakefield). One of the prime commercial locations in Toronto is the intersection of Yonge Street and Dundas Street, (heretofore referred to as the YDI) which is surrounded by instantly recognizable retail stores, major shopping centers, restaurants, and skyscrapers; all are features that make the intersection truly valuable, at least in the geographic sense. As one moves away from the YDI, however, the height of the buildings decreases, the frequency of recognizable brand name stores lessens, and the sense of being in a densely populated downtown area rapidly diminishes. ...read more.

In the case of Toronto, even though many people may work in the CBD, they are willing to reside in the suburban areas because of lower prices for housing and ready availability of public transportation on the Toronto Transit Commission's services. Residents of areas even farther from the CBD, such as Markham and Richmond Hill, can use the Greater Ontario bus service to commute to and from the CBD. The map below shows how distant these suburbs are from the CBD. Map 2: Suburbs (Microsoft) Statistical Test: Spearman's Rank Correlation Coefficient Geographic Model: Central Business Height Index The Central Business Height Index calculates how much a single plot of land is used for CBD functions (actions carried out within the building that contribute to the business activities of the CBD) The formula is as follows: For example, the Bank of Montreal building, which is completely devoted to CBD functions, has 72 floors (City of Toronto). Because of this, the ratio of the floor area of CBD functions to the ground floor area will be 72 to 1, giving it a CBHI value of 72. For a building to be considered as located in the CBD, the CBHI value must be at least 1 (Waugh). Using the CBHI value, it can be concluded that the Bank of Montreal is in the CBD. For the buildings in the core of the CBD, virtually all of their functions are CBD-related, so the CBHI value will essentially be the number of floors in the building. On the other hand, there are buildings in the suburbs, including residential structures, whose CBHI values are extremely low. An example is my house, which has three floors and has absolutely no CBD functions. As a result, the CBHI value is 0, and it can be concluded that the house is not in the CBD. Statistical Test: Spearman's Rank Correlation The Spearman's Rank Correlation is used to describe the degree of association (strength of relationship) ...read more.

However, in the suburbs, the land values would probably not change as quickly and prices would be more balanced as a result. Lastly, it may have been better to do separate studies for private and municipal parking lots as municipal parking lots would tend to be cheaper because of government policies to control prices and prevent inflationary trends from changing prices. The lower government prices would then cause changes in the results. However, although following the previous suggestions would make for a more complete investigation, it may not always be practical. For example, conducting a study of all of Toronto's parking lots would definitely be more exhaustive, but the impracticality of it is apparent: it would be nearly impossible to travel around all of Toronto and obtain data for every single parking lot. Also, the focus of this study was, specifically, the changes in parking prices within a limited distance from the CBD, so within the boundaries of this investigation, it may not be entirely necessary to conduct a study for all of Toronto. This would also give rise to new complications: should the most distant suburbs be included, or should one only study the parking lots located in the city area? Should on-street parking be studied as well? Because of the tremendous difficulties that would result from conducting a completely thorough study, it is perhaps more expedient to focus on a specific area. The many mistakes in the hypothesis suggest the need for an alternative. First, the hypothesis should not be so specific; the over focusing of a prediction is prone to error. A better hypothesis may have been: "As distance from the YDI increases, the price of parking will decrease". This statement would have been much better supported by the data. After completing the investigation, several questions arise: How much would the parking rates vary in a small town without a major CBD? How would parking rates change in the Toronto suburbs? If the area of investigation were extended, how might the results of the study be affected? . 1 ...read more.