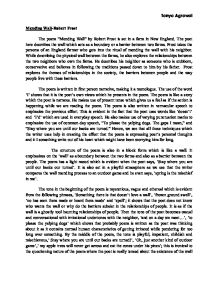 Mending Wall-Robert Frost The poem "Mending Wall" by Robert Frost is set in a farm in New England. The poet here describes the wall which acts as a boundary or a barrier between two farms. Frost takes the persona of an England farmer who gets into the ritual of mending the wall with his neighbor. While describing the physical wall between the farms, he also explores the relationships between the two neighbors who own the farms. He describes his neighbor as someone who is stubborn, conservative and believes in following the traditions passed down to him by his father. Frost explores the themes of relationships in the society, the barriers between people and the way people live with these barriers. The poem is written in first person narrative, making it a monologue. The use of the word 'I' shows that it is the poet's own views which he presents in the poem. The poem is like a story which the poet is narrates. He makes use of present tense which gives us a feel as if the action is happening while we are reading the poem. The poem is also written in vernacular speech to emphasize the previous effect. ...read more.

By the middle of the poem, the tone is playful, impatient, childish and mischievous,' Stay where you are until our backs are turned!', 'Oh, just another kind of outdoor game',' my apple trees will never get across and eat the cones under his pines'; this is ironical to the questioning nature of the poem where the poet is really tensed about the existence of the wall as a barrier between people. Then it is frustrated and introspective, 'He only says, Good fences make good neighbors', which highlights poet's contrasting view towards life as compared to his neighbor. And finally we see that the poem ends in disapproval, 'He will not go behind his father's saying' which shows that poet is really irritated by his neighbor's nature but on a deeper context it shows that the poet does not agree with existence of wall between the farms or the barriers between the people in the society. Hence, we can say that the change in tones shown in the poem focus on the fact that it is the poet's own views which are being presented in the poem and it is also to emphasize on the poem's colloquial nature as usually humans when speaking generally go through various tone swings in their speech depending on the atmosphere surrounding them. ...read more.

Another metaphor, 'He is all pine and I am apple orchard' signifies the differences between the poet and his neighbor in their approach to life. Pine as it is spiny and woody signifies a dull and dry life of the traditionalist neighbor whereas apple being juicy and fresh signifies a happy and jovial life of the poet who believes in no barriers. The simile in the poem, 'Like an old-stone savage armed' signifies the nature of the poet' neighbor who is very stubborn and traditionalist and in this simile he compares the neighbor to a stone-age man with old values. The poet also exploits sound effects in the poem to emphasize on the wall, the barriers in the society. He uses assonance, 'What I was walling in or walling out' and sibilance, 'That sends the frozen-ground-swell' to emphasize the wall which is the unwanted barrier between the poet and his neighbor from the viewpoint of the poet. Therefore, at the end we can say that the main idea being brought out by the poet is that the walls which exists as barriers between the people need to be broken down as he says, 'Something there is that doesn't love a wall' ?? ?? ?? ?? Tanya Agrawal ...read more.