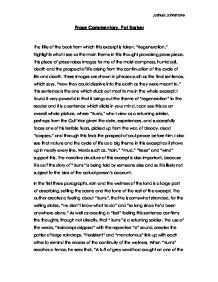 Prose Commentary, Pat Barker The title of the book from which this excerpt is taken, "Regeneration," highlights what I see as the main theme in this thought provoking prose piece. This piece of prose raises images for me of the moist dampness, humid soil, death and the prospect of life arising from the continuation of the cycle of life and death. These Images are shown in phrases such as the final sentence, which says, "Now they could dissolve into the earth as they were meant to." This sentence is the one which stuck out most to me in the whole excerpt; I found it very powerful in that it brings out the theme of "regeneration" to the reader and it is a sentence which sticks in your mind. I can see this as an overall whole picture, where "Burns," who I view as a returning soldier, perhaps from the Gulf War given the date, experiences, and successfully faces one of his terrible fears, picked up from the war, of b****y, dead "corpses," and through this finds the prospect of soul peace before him. I also see that nature and the cycle of life as a big theme in this excerpt as it shows up in nearly every line. ...read more.

The words "mud dragged " are effective here, for even to say them together takes effort and your reading is slowed by them, amplifying their effect. The "sucking" of your reading is again shown in the words "mud-clogged boots", the "d", "g" and "b" sounds all together make the reader have to pronounce each syllable in a drawn out way. Where the author talks about, "the whine of shells" he is referring to the sound that you hear when you put a shell to your ear and compares it to the noise of the wind through the trees. In paragraph five the author shows the exhausted "Burns" so tired he cannot even be bothered to "wipe away" the rain drenching his face. In the next three paragraphs, the tone of the extract becomes quieter; there is neither mention of the intense rain nor the sound of it. The tone of the setting becomes almost sinister amongst the trees. "Burns" now in what he thinks is the safety of the trees continues to stumble and the writer again uses the repeated "b" sounds in the words, "began", "stumbling", "blindly" and "between" to show us that "Burns" has still not quite got his bearings right yet. The author uses the repeated "c" sounds in the words "catching", "clumps" and "bracken" to the same effect. ...read more.

The last two paragraphs of the excerpt talk of "Burns" facing his fear, finding a peace amongst his dead "companions" and his finding a control which he did not have at the beginning of the excerpt. "Burns" turns back therefore facing his fears. The fact that the author talks about what the "real Rivers" might have said confirms that "Rivers" is a real person and he is probably still alive. When "Burns" lets down the dead animals he is allowing for the natural cycle of "Regeneration" to be complete. This seems to make him feel better for he sits down inside the circle of his "companions" who he no longer views as scary and is happy because, "Now they could dissolve into the earth as they were meant to do." By facing his fear, "Burns" was regenerated in himself, this also made him content. The last line is the most important in the whole text; it sums up and puts into context the entire idea of Regeneration. In conclusion I would say that there is one main theme in this excerpt; it being the ongoing recurrence of the idea of "Regeneration" through the means of nature, water, the cycle of life and death and the facing of fear. It is also important to say that in order for regeneration to happen, something has to die. ?? ?? ?? ?? Joshua Johnstone ...read more.