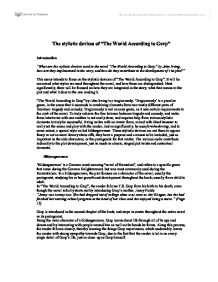 The World According to Garp

The stylistic devices of "The World According to Garp" Introduction "What are the stylistic devices used in the novel "The World According to Garp" by John Irving, how are they implemented in the story, and how do they contribute to the development of the plot?" This essay intends to focus on the stylistic devices of "The World According to Garp". It will be examined what styles are used throughout the novel, and how these are distinguished. Most significantly, there will be focused on how they are integrated in the story, what that means to the plot and what it does to the one reading it. "The World According to Garp" by John Irving is a tragicomedy. 'Tragicomedy' is a peculiar genre, in the sense that it succeeds in combining elements from two vastly different parts of literature: tragedy and comedy. Tragicomedy is not an easy genre, as it sets certain requirements to the style of the novel. To truly achieve the fine balance between tragedy and comedy, and make these intertwine with one another is not easily done, and requires help from various stylistic elements to truly be successful. Irving writes with an ironic force, mixed with black humour to really set the scene and play with the reader. Just as significantly, he uses foreshadowing, and to some extent, a special style called bildungsroman. These stylistic devices are not there to appear fancy or act as mere literary show-offs, they have a purpose and a reason to be included, just as important as the side characters, or the protagonist for that matter. The various styles contribute indirectly to the plot development, just as much as classic, staged plot twists and contextual elements. Bildungsroman 'Bildungsroman' is a German word meaning "novel of formation", and refers to a specific genre that arose during the German Enlightenment, but was most commonly used during the Romanticism. In a bildungsroman, the plot focuses on a character of the novel, usually the protagonist, studying his or her growth and development throughout the book; usually from child to adult. ...read more.

All these little details (amongst many others) are all present to do the setting of the horrible accident and set the mood to be a mix of shock, awe, sadness, and black humour. Without it, there would not be much sense in laughing, and the accident would only serve the sole purpose of advancing the plot by supplying the reader with an ever-so-classic agent of advancing a plot: a simple climax. Here, it is still a climax, yet so much more: more vivid and intense, more unique, and much more true to the experience Irving intends to give. As stated previously, the black humour and irony lies within all the little details. For instance, the fact that Garp is such an overprotective father and yet still indirectly contributes to the death of one son and mutilation of another, or when Helen feels the guilt coming off her shoulders as she is satisfying Michael Milton in his car, and right after she is haunted with new guilt because she contributed indirectly to the accident in the driveway. The incidence later in the novel where Garp is assassinated in the very same place as he grew up, also displays elements of irony and black humour. The black humor in "The World According to Garp" has a key function regarding the way the novel is meant to be read. Irving uses the stylistic device to play with the reader's thoughts, and influence the plot so that it stays fresh, surprising and entertaining. With the irony and black humour, the reader is able to look back after reading the book and think of the details and plot twists while smiling slightly and shaking his head, because each individual reader forms his own impressions and perceptions. Black humour is quite vague and in most cases very subjective to the one perceiving it, and is therefore an excellent way for an author to involve his audience in his work, as the readers will each think and deduce different things. ...read more.

The Under Toad is somewhat the very core of the novel. All plot twists, all important details, the climax, and the epilogue, all involves elements of the Under Toad - even a chapter is named "The habits of the Under Toad"! The reason is that in "The World According to Garp" the plot is all about how T.S. Garp and his family get by and how their lives unravel. As stated, a lot of stylistic devices are used to advance the plot, and symbolism involving 'the Under Toad' is just as significant. "The Under Toad" is causing something for the characters which has an effect on them, and hence the plot. For instance, the driveway-accident is a clear example of the Under Toad's intervention: "(...) But it was neither green nor brown, Garp thought. It was me. It was Helen. It was the color of bad weather. It was the size of an automobile." After the accident, the family is reduced to three persons instead of four, and they are thrown head-first into a new life. The plot is advanced with the help of "the Under Toad"; it is progressed by periodically occurring incidents, symbolised by the Under Toad. The plot of a novel is often a complicated matter. Many things happen, many characters are introduced, a lot of places are visited, settings are set, and dialogues and monologues occur. What is equally important regarding a story's plot, is not necessarily what meets the eye, but what's beneath the surface; all those small details which make up the infrastructure of a piece of literature: the styles. In "The World According to Garp", the various styles play a vital role in connection with many aspects, and especially when it comes down to the plot. The novel gets its own personal touch from the way it is composed, and it has a great influence on how it is perceived and remembered. The styles of "The World According to Garp" are key elements, and the novel could not do without them. ...read more.