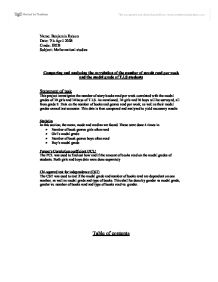 Statistics project. Comparing and analyzing the correlation of the number of novels read per week and the modal grade of T.I.S students

Comparing and analyzing the correlation of the number of novels read per week and the modal grade of T.I.S students

This project investigates the number of story books read per week correlated with the modal grades of 30 girls and 30 boys of T.I.S. As mentioned, 30 girls and 30 boys will be surveyed, all from grade 9. Data on the number of books and genres read per week, as well as their modal grades earned last semester. This data is then compared and analyzed to yield necessary results

In this section, the mean, mode and median are found. These were done 4 times in

The PCL was used to find out how and if the amount of books read on the modal grades of students. Both girls and boys data were done separately

Mode= 61-80, meaning that the largest number of girls gained marks within that range

median value shows that midway modal mark % of the girls was lower, showing poorer academic status of the girls

Mode: 2, which shows that most girls preferred a lower amount of books to read

Median:  3.5th value: 1. This shows that the middle amount of books read was 1, which is even lesser than the median number of books by boys.

As shown, there is no correlation between number of books read and modal mark for girls

The next step was to do the chi squared test. It was necessary to see which were dependent and which were independent. This will show if there is relationship between no of book genres read and modal grade marks. Modal mark groups were made into below and above 61-80. This is because calculations made previously for girls and boys generally lay round 61-80. Those with the exact average were added to the above group.

The expected values were calculated using the GDC:

Using the GDC we can find the value of X² calc using the GDC. The following results are shown

From above, the following was deduced

Using the P value at 5%, decision taking was made

Ho: Number of books read and gender are independent

H1: Number of books read and gender are dependent

Therefore number of books read and gender are independent

There are a few factors which influence the reliability of this experiment.

Only 30 girls and 30 boys were chosen, as there was the need to use a an equal amount of people for each gender in order to gain fairer results

A specific grade was chosen: grade 9 as it has the largest class population, thus more data gained

Students seemed to have more of higher marks than lower, showing the unreliability of their answers in the questionnaire, as well as lower amount of books read per week. This may be the reason why there is little or no correlation at all for the girls, and a string negative correlation for the boys. In fact, it is plausible to say that from the results gained, the girls who have positive, but low correlation seem more trustworthy than that of the boys’

In the modal grade, the only categories given were that of below 40 to 100. This is because as confirmed with the English Language teacher, no student gained below 40 very often. Thus values of 10-30 were summarized into that of “below 40”