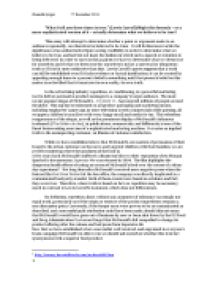 This essay will attempt to determine whether a point or argument made to an audience repeatedly, can therefore be believed to be truer.

﻿Chanelle Jerger 7th December 2011 ?What I tell you three times is true.? (Lewis Carroll) Might this formula ? or a more sophisticated version of it ? actually determine what we believe to be true? This essay will attempt to determine whether a point or argument made to an audience repeatedly, can therefore be believed to be truer. It will furthermore tackle the significance of an authoritative figure oozing credibility in order to determine what we believe to be true, and last but not least, the fashion in which such a speech or intention is being delivered. In order to start on this analysis we have to determine what we deem true for ourselves and if what we deem true for ourselves is in fact a universal or ubiquitous truth or if it is far more subjective than that. Lewis Carroll?s quote suggests that a truth can still be established even if it lacks evidence or factual justification; it can be created by appealing enough times to a person?s belief in something until that person?s belief on this matter is so fortified that it turns into its own reality, its own truth. In the advertising industry repetition, or conditioning, is a powerful marketing tool to deliver persuasive product messages to a company?s target audience. The most recent popular slogan of McDonald?s ? I?m lovin? it ? has targeted millions of people around the globe. This tag line is embossed on all product packaging and marketing means, including employees? name tags, in-store television screen commercials while queuing, all wrappers, children?s toys (free with every happy meal) ...read more.

By way of example, the advertising campaign for Accenture (a prominent management consulting firm) once used the following slogan for their campaign: ?Go on. Be a Tiger.? Tiger Woods? strength, mastery, discipline and relentless focus on winning are universally qualities that mirror the characteristics of any high performance business, making him the ideal representative for marketing & brand positioning. ?Tiger is the best at his game and we want our clients to be the best at theirs?[2]. The argument against making Tiger Woods repeatedly the epitome of integrity and perfection is a rather obvious one: Tiger became a victim of his own humanity in a way; he fell off the proverbial pedestal when news about repeated committed acts of infidelity seeped out into the public. The supporters of the fallen Tiger argue that his private life and allegations pertaining to it should remain just that: private. However, literally within minutes of news breaking about being caught red-handed, the majority of his advertising contracts had been withdrawn. The truth that the industry had created, a sophisticated fabricated truth synonymous with a person, namely Tiger Woods, a truth created so people would believe in it, was wiped out in one scandal long before he was ?convicted? of a crime. Overnight Mr.Woods went from a loved and adored icon to a fallen pedestal in minutes. Tiger Woods made the complete wrong turn in his scandal and should have kept it personal and not have made it a public matter for the press to write about. ...read more.

away from the hot stove or the electrical socket, unfortunately with little success, I felt the need to experiment it on my skin in order to justify the advice and the cautious warnings I have been told On the other hand, if today something were to be repeated to me three times, I would view it in a more sceptic way and find that what is in fact being told to me could be the complete opposition of the truth. I would feel that rather being told what may be true, I am being manipulated into something that someone feels needs to be repeated several times in order to convey a message. In result, I find that telling me something three times is contradicting to the idea of what is being told is true. In summary it is fair to say that truth does not lie one hundred per cent in repetition. Far from it, although certain examples above will have made a case for the opposite but they represent the exception from the rule. It has furthermore been successfully argued that the credibility of the person delivering the message, instigating the belief, creating the truth where it is not based on sufficient facts, is of utmost importance. Last but not least, the fashion in which a prospective truth is delivered can be an incredibly powerful tool as long as the desired delivery of truths has a plausible foundation and a relatively critical audience so not to encourage fanatical movements based on hot air. ________________ [1] http://money.howstuffworks.com/mcdonalds5.htm [2] http://newsroom.accenture.com/article_display.cfm?article_id=4045 [3] http://www.spartacus.schoolnet.co.uk/GERmein.htm [4] http://en.wikipedia.org/wiki/Propaganda_in_the_United_States ...read more.