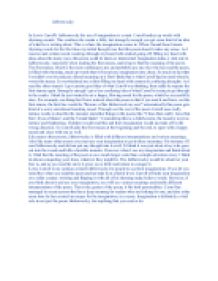 Lewis Carroll in my opinion created Jabberwocky for people to use their imaginations.

Jabberwocky In Lewis Carroll's Jabberwocky the use of imagination is a must. Carroll makes up words with rhyming sounds. This confuses the reader a little, but strangely enough you get some kind of an idea of what he is writing about. This is where the imagination comes in. When I heard these bizarre rhyming words for the first time my initial thought was that this poem doesn't make any sense. As I read on and certain words would go through my head, bells started going off, filling my head with ideas about the many ways this poem could be taken or interpreted. Imagination takes a vital role in Jabberwocky, especially when reading the first stanza, and tying to find the meaning of the poem. ...read more.

For example, one thing that I have noticed about the poem is that if you read it and leave out the first stanza, the first line would be "Beware of the Jabberwock my son!" automatically this poem gets kind of a scary and almost haunting mood. Through out the rest of the poem Carroll uses really intense words to describe the monster and other things in the poem, like "Claws that catch!, Jaws that bite!, Eyes of flame!, and the Vorpal blade!." Considering this is a child's poem, the mood is way too intense and frightening. Children would read this and thier imagination would just take off in the wrong direction. So Carroll adds the first stanza at the beginning and the end, to open with a happy mood and close with one as well. ...read more.

Lewis Carroll in my opinion created Jabberwocky for people to use their imaginations. If you let you mind free when you read this poem and not take it on a literal level, Carroll will take your imagination on a roller coaster, twisting and flipping it with all of his rhyming make believe words. However, if you think about it and use your imagination, you will see various meanings and totally different interpretations of the poem. That is the genius of the poem, it fits both personalities. Carrol has managed to create a poem that has a deep meaning for readers who are looking for one, and also at the same time he has created an escape for the imagination, in a sense. Imagination is definitely a vital role in not just the poem Jabberwocky, but anything that you read or do. ...read more.